Day 21: The failure to learn

Today I was back to playing mere mortals I’ve never met. But in our division everyone’s dangerous and I certainly wasn’t letting up.

1. Who is the current Prime Minister and head of the government of the Republic of Iraq?

Sigh. I’ve only seen the guy’s name three or four thousand times in news headlines. I’m not particularly interested in Iraq, other than to whatever extent it affects or threatens the U.S., so I never bothered to learn the Prime Minister’s name. I knew it was al-M___, something with an A and an I. Knew for a fact the last part had six letters, as I often notice and remember the number of letters in words. (Three pleasant 8-letter town names that have come up in the last day during my trip to the Bay Area: Petaluma, Larkspur, Woodside.) I also knew that it had alternating vowels and consonants. Lacking a better idea, I guessed al-Mazawi. The correct answer was Nouri al-Maliki. Close enough! I totally deserve it! (I do not deserve it.)

2. In the same year that former U.S. Secretary of State George Marshall was awarded the Nobel Peace Prize as a result of his work on his namesake reconstruction plan, British Prime Minister Winston Churchill was awarded a Nobel Prize in what category?

Two of the great literary contributions by statesmen were President Grant’s memoir, which he only wrote for money at the end of his life to provide for his wife, Julia, and Churchill’s significant history of WWII. I haven’t read it, but I’d like to; I’ve certainly read about it. Aside from everything else he accomplished, the polymathic Churchill was an outstanding writer. On the same trip to London I mentioned the other day, we visited the Churchill War Rooms in Whitehall from which the great man led his country’s wartime efforts against the Axis powers. It was as stirring as you might expect. Anyway, the answer was literature.

I knew y = x2 was a parabola; indeed, I scored a correct answer for my knowledge of parabolas last season. But the area underneath a parabola? Fat chance. I’m still probably as good at any SAT math question as I was in high school, but this was a bit trickier. There was clearly some kind of sigma involved. Maybe if Mike Markovich and I hadn’t sat in the last row of high school calculus all year, quietly smarting off about the Masters golf tournament (our teacher wore a forest-green blazer), Rosalie D. and the KBC, Julie B. and the LBM, Liz F., Insane Jane, Stork McG. and what have you — yes, I still remember our inside jokes 20 years later — then I would have learned enough to remember a useful formula for this problem.

Speaking of Mike, I had dinner with him this evening at the Park Tavern in North Beach, San Francisco. He's a LL rookie this season so since we’d both already played, we compared notes on today's questions. To his credit he remembered the formula 2/3 base x height; there's also x3 / 3. Either one would have gotten me home.

But since I didn't remember these during the match day, I drew the parabola and broke down the answer into its three component parts. The lower right section had an area of 1; the uppermost section was slightly less than 3/2; and the left section was somewhat less than 1/2. Thus I knew the answer was greater than 5/2 and less than 3. Without much confidence I guessed 2 3/4 and ended up fairly close to the correct answer, which is to say I got the wrong answer. The actual area was 8/3, or 2 2/3.

My opponent was super-strong in math, so I assigned this question a value that was never used in ancient Rome: 0. 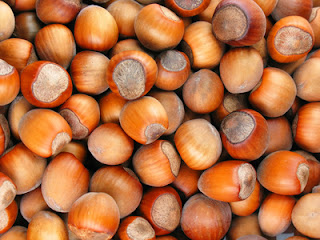 4. What type of nut are these?

I knew them on sight: filberts (aka hazelnuts). During my freshman year of college, after learning that I have a nut allergy, my frenemies across the hall used to leave filberts in my dorm room. They didn’t understand that by “nut allergy” I meant them. Need I even mention that both of these guys ended up in law school?

5. Name the film, scheduled to be released in the U.S. in July of 2012, which will be the thirteenth feature film produced by Pixar Animation Studios, and the studio's first fairy tale, as well as its first with a female main protagonist.

A few days ago I was driving around Berkeley, California with an old friend of mine. I mentioned that Pixar was down the road in Emeryville and we started talking about Pixar movies. I told him I’d heard the studio was working on a Monsters, Inc. prequel called Monsters University. He replied that he’d heard the new one coming this summer, Brave, was going to be really good. Thank you, Joop!

6. Who celebrated his 50th birthday by premiering his Symphony No. 5 in E flat major at the Helsinki City Orchestra on December 8, 1915?

I can name two Finnish classical music people: Jean Sibelius and Esa-Pekka Salonen. Given the timing of the question and the fact that Salonen is probably in his 40s or 50s right now, not to mention a conductor, my only guess was Sibelius. Happily, Sibelius was correct. My opponent was iffy in classical music so I gave this one the 3.

There’s no shame in not getting a correct answer, but it’s frustrating not to come up with two answers that you’ve either known, or known how to solve, at some point in life. I hate forgetting things. Luckily for me, my opponent managed three correct answers to my four, gave me a 3 for Sibelius, and gave me a 1 on the parabola. I escaped with a 6(4)-3(3) win.
Posted by Ben at 12:05 AM

1. Yeah, same here. Mazawi was a better guess than whatever I put down.

3. This one's interesting. I could conceptualize the problem, but I couldn't work out the formula. So I did what Newton himself probably did at one point, I drew the curve out as best I could and started drawing very thin vertical rectangles to approximate the area. Eventually I figured out that 2.66 was the likely area (8/3 never crossed my mind). I got credit for that answer, even though I could see an argument that it's not technically right. I was very proud of this one, it's by far the most work I've ever put in on an LL answer.

4. It took a few seconds of meditating to hone in on it, but I did come up with hazelnuts. Hazelnuts are a pretty important ingredient in Austrian desserts, so ... I was glad to get this one right.

5. Nope, never had a prayer on this one.

6. I put down Strauss, meaning Richard, on the logic that the age fit. Didn't get it right, but it did cheer me up that R. Strauss was born in 1864.

Actually, I looked up that formula after the fact, alas. Sure would've helped -- I'd have lost by 1 instead of taking the miserable shutout. Not since Tiger irked Fuzzy has the green jacket cost someone so dearly.

I honestly sometimes can't be bothered to suss out the math answers--I'm engaged in a complicated strategy not to get promoted, so I take those as wrong answers I'm happy to have. But I took a shot in the dark with 4 Pi, too.

You need calculus for the math question.

Areas under the curve are computed using integrals. The anti-derivative of x^2 is (1/3)x^3. You evaluate this at the two endpoints (x=2 and x=0) and subtract, and you get 8/3.

You usually can't "reason out" measurements with curves; they're too subtle. Either it's a formula you happen to know (like the area of a circle), or you go back to first principles (calculus).