Day 7: A bad bucket of balls

Another day, another punch in the face from six questions I didn’t know much about.

1. What city, about 100 miles north of Damascus and the country's third-largest, has been under partial siege by the Syrian Army since May of 2011, and has been informally dubbed the capital of the Syrian Uprising?

Before I went to Israel at age 12, I couldn’t name a single city in Syria. Since then, I’ve known exactly one. Until the last few weeks, that is, when every time I turn around, there’s a news story about Homs. Turn on NPR: Homs. Turn on the TV: Homs. Literally the first headline in today’s NYT breaking news email: Homs. It’s all Homs, all the time. I certainly haven’t been following the exploits of the Syrian Army since May of 2011, but lately, it seems, Homs is getting Homsier than ever. Whether that was the answer, I had no idea, but considering the only other Syrian city I’d ever heard of was mentioned in the question, it was Homs or nothing. To my happy surprise, it was correct.

2. Though founded by an American and an Australian, the major international airline Cathay Pacific is headquartered in what city, with that city's primary airport serving as the airline's main hub?

I knew Cathay was a traditional name for old China and that this was a Chinese airline. When Boeing relocated its corporate headquarters a few years ago to my hometown of Chicago I bought a few shares, and now I get the annual report and casually follow news reports of which airlines around the world are buying Dreamliners. Most of these are Asian airlines and I felt fairly confident that Cathay Pacific was among them. Unfortunately, I had no clue which city was its main hub. I guessed Shanghai because it sounded plausible. An even better guess would have been Hong Kong, in that it is the correct answer.

3. Consisting of the Heer (army), Kriegsmarine (navy) and Luftwaffe (air force), what was the term used for the unified armed forces of Nazi Germany?

The only thing I could have told you about the Nazi war machine was that the Luftwaffe was the air force. Once again, the one thing I felt sure of was right there in the question. I guessed Blitzkreig, as in “lightning warfare.” (OK, maybe I knew two things.) It seemed awfully unlikely that Blitzkreig was the overall name of the unified German armed forces in WWII, but it’s amazing what you’ll guess when you don’t have anything better up your sleeve. The correct answer turned out to be Wehrmacht.

World history. Geography. Enough of these. I am trying to win some matches and write a blog here.

4. White rum, sugar, lime juice, sparkling water and mint: these are the five traditional and standard ingredients of what popular cocktail? 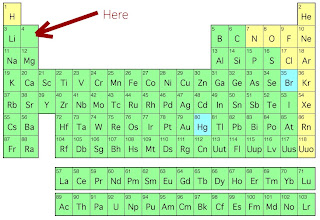 5. There are two letters missing from this graphic. What are they?

God, this one was frustrating. I took AP chemistry in high school. Three single and two double periods a week for an entire school year I stared at that periodic table, plus entry-level chemistry in summer school two years earlier. I actually do remember that there was a weirdly random element way down in the low atomic numbers, lower than your single-letter element symbol hit parade of B, C, N, O and F. But high school was over two weeks ago and hell if I could remember the mystery element now.

I ran down the alphabet in my mind a few times trying to come up with the winning combination. Every time I thought of an element, even a low-numbered element, I’d get excited until I hunted around and found it was already on the table. Silicon! Calcium! Sodium! Astatine! Chlorine! All already present and accounted for. Eventually I gave up and guessed De in the hope that it was short for something other than a U.S. state. The answer was beryllium, symbol Be, the first two letters of my name. I did know it was correct when I saw it.

6. Arma virumque cano, Troiae qui primus ab oris. This is the introduction to the epic tale of what Trojan warrior?

There aren't too many people who have epic tales written about them in Latin. Why give it away by calling the guy a Trojan warrior? Isn’t that what Troiae is all about? Not to be confused with the Iliad (written in Greek), the epic tale of the Trojan War in Latin is the Aeneid, so named because it is about Aeneas. I’m no expert on the subject, having mixed up Hector and Ajax last season, but even I knew this one.


As I mentioned yesterday, getting just a couple of correct answers on a match day is a ticket to nowhere in the brutal division I'm playing in this season. There were plenty of good players who fell just short of qualifying for this bracket, and on today's questions, at least, our C division is noticeably stronger than the five other C divisions. We're the AL East.

Thanks to Homs I was lucky enough to get 3 correct answers, but since my opponent got 4 and played solid defense, I couldn't even manage a tie. We both allowed one point more than the minimum, but even though he let me score 3 points rather than 2, I couldn't prevent him from scoring 4 even if I'd played perfect defense. He won 5(4)-3(3). Had I been able to remember beryllium, I would have won by a point.

Mojito was the gimme of the day at 81% correct and average defense 0.7. True to form, both of us nailed it and assigned it a 0. Our defensive miscues were my giving him a 3 on Homs, which I failed to see as the second-easiest question of the day leaguewide, and his giving me a 2 on Aeneas. (I was wrong, by the way, thinking the Aeneas question as written was a gimme; only 36% of players leaguewide answered it correctly. But since literature is one of my strongest categories, my opponent might have seen it as easier for me.)
Posted by Ben at 7:00 AM

I basically only consume news anymore via my Twitter feed (which I believe still keeps me pretty informed about the important stuff), and I knew Homs cold just from that.

I was torn between Beijing and Hong Kong, but I ultimately picked the former after deciding that knowing what "Cathay" meant was the key insight. Sadly, no.

Ditto everything you said about the Nazi armed forces.

I'm like a alternate universe Ken Jennings, where I don't drink for non-religious reasons but can't be bothered to study up on potent potables for trivia contests.

If the missing element had been lower down in the table, I'd've had to struggle, but I know the first six elements cold.