That is so true 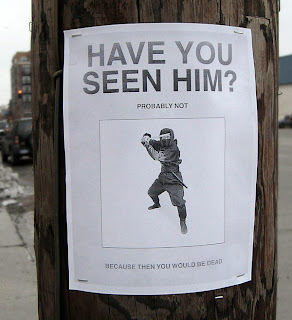 Let's spend the night together

Tributosaurus, one of the more ambitious cover bands ever to pick up a guitar, goes after some big game when they perform as The Rolling Stones for New Year's weekend.

My Flavorpill preview is here.
Posted by Ben at 10:00 AM No comments:

Here's a Christmas classic to enjoy as you open your presents:

Humor columnist and FOBB&B Mark Bazer hosts a monthly variety show at The Hideout in Chicago in which he interviews celebrities and stages performances by comedians, musicians and artists. Think of it as a funny version of "The Tonight Show with Jay Leno."

It's called The Interview Show.  You should check it out not because Mark is a great guy with a cool wife, two neat kids and a consistently funny newspaper column, although he is, but because he's a perceptive, prepared, intelligent interviewer who handpicks an eclectic lineup of guests every month and showcases them in an appealing, laid-back format. Plus the show is hilarious.


The Interview Show takes place on the first Friday evening of every month at The Hideout, 1354 W. Wabansia Ave. in Chicago. Admission? A mere $5. More information at markbazer.com.
Posted by Ben at 8:00 AM No comments:

Use the Force, Hermione

This old chestnut has been rattling around the Internet for years, but as NBC used to say in justifying its television reruns, if you haven't seen it, it's new to you: 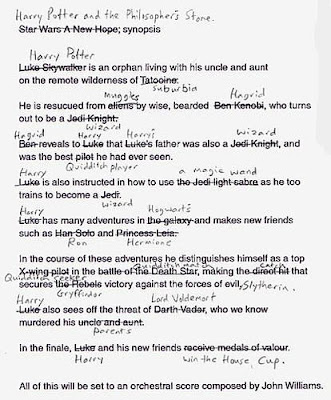 Happy holidays to you

Love is all around

Seen on my desk at work the other day: 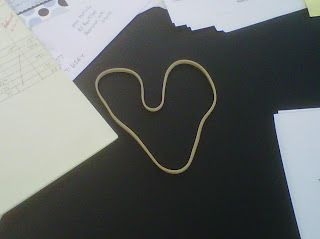 FOBB&B and current events librettist Ben Greenman is a good guy to have around, particularly if you work at the New Yorker and made it to the office holiday party the other night.

Ben decided to celebrate the magazine's long history (estd. February 1925, as my fellow Tilleyphiles will know) by creating a party playlist featuring one hit song from every year of the magazine's existence.

The complete playlist is here, as are links to audio versions you can listen to. Surely you've already got Jelly Roll Morton's "Fat Meat and Greens" on your iPod, but check it out.

Tip credit: kottke.org, a site I should have started reading years ago and in whose general direction I, and all general interest bloggers, must genuflect
Posted by Ben at 6:00 AM No comments:

It's 24 straight hours of sketch comedy, celebrity interviews, rock music and expert improvisation. This year's highlights include difficult but brilliant Wilco frontman Jeff Tweedy at 8pm; difficult but brilliant recording engineer Steve Albini interviewing fellow Northwestern University alumnnus, Groupon founder and incipient billionaire Andrew Mason at 10:30pm; the difficult Sally Timms and brilliant Jon Langford at 7:30am; and the brilliant, easygoing Robbie Fulks at 1pm. More performers will be added to the schedule up to (and past) showtime, and surprise walkons are routine.

Did we mention the cause? All proceeds go toward Christmas presents for poor kids -- specifically those who wrote letters to Santa Claus, helpfully diverted to Second City operatives by the elves at the downtown Chicago branch of the U.S. Postal Service.

If that doesn't appeal to you on an artistic, altruistic or charitable level, you are hereby invited to stop reading my blog permanently.

For everyone else...   My Flavorpill preview is here.
Posted by Ben at 5:00 PM No comments:

I just caught the press opening of Steppenwolf Theater Company's revival of Edward Albee's Who's Afraid of Virginia Woolf? and found it suitably harrowing.

My Flavorpill preview is here.
Posted by Ben at 1:00 PM No comments: 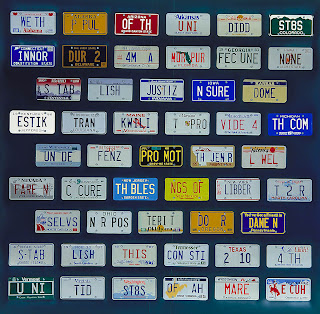 It's the DOME ESTIK TRAN KWILI T that I particularly enjoy.
Posted by Ben at 6:00 AM 3 comments:

I've taken an interest in crossword puzzles over the past several years, or more accurately, focused my lifelong diffuse interest. By solving the New York Times crossword at first every Friday and Saturday, then nearly every day, and attending the last two American Crossword Puzzle Tournaments, I've gradually become immersed in a whole new lake.

Besides getting better at solving crosswords than I've ever been, I've also come to appreciate the lake's depth. Beyond the millions who solve the crossword in their daily newspaper, there are active communities of crossword constructors, daily blog readers, and listserv discussion groups, plus the thriving membership of the world's oldest surviving puzzle club (the National Puzzlers League, founded 1883).

Along the way I've met a lot of interesting people: crossword bloggers, newspaper and magazine puzzle editors, superstar solvers, and plenty of just plain folks like myself who happen to share this interest.

Take crossword constructor Peter Gordon.  Like many puzzle pros, he got his start at Games magazine as a young prodigy, and went on to work with Will Shortz at the New York Times. When a new daily paper called the New York Sun came along, Peter became its crossword editor.

He raised a lot of eyebrows and developed a hardcore following as he ambitiously, audaciously mounted the first serious challenge to the NYT in decades for crossword supremacy. Who won the battle? Everyone who likes quality crossword puzzles.

Unfortunately the Sun didn't make it, but hearing the outcry of his public, Peter kept its beloved puzzle going under the name Fireball Crosswords (get it?). It's now a subscription-based puzzle that Peter will email you 40 times a year for a nominal fee. I handed him a $10 bill at last year's national tournament and it was so worth it.

The Fireball puzzle isn't for everyone. As Peter says on the Fireball website, "The puzzles are hard. How hard? If you have to ask, too hard for you."

If you can finish or at least make a healthy dent in the Saturday New York Times crossword, you will enjoy the Fireball. If you run out of momentum by the middle of the week, or you prefer more casual crosswords like those in USA Today or TV Guide, this is not the puzzle for you.

I mention it now for two reasons. First, it's the holiday season, and if you know someone who likes tough crosswords, a 2011 Fireball subscription would make an excellent gift. Visit its website, FireballCrosswords.com, for subscription information.

You'll also find a number of puzzles Peter wrote and some interesting articles about the Sun puzzle, particularly a 2005 story from The Weekly Standard in which fellow constructor Matt Gaffney attempts to settle, in a methodical, systematic fashion, the then-raging debate over which puzzle, Sun or NYT, is best.

I also mention Peter because I recently contributed in a small way to one of his other current puzzle gigs, the weekly crossword at The Week magazine. At the end of every calendar year, Peter creates a year-in-review puzzle for The Week in which he summarizes the year's news headlines by anagramming the names of newsmakers in the grid. For example, if Jay Leno had been elected mayor of Los Angeles (God forbid), Peter might give the clue JAY LENO for the answer ENJOY LA.

Several weeks ago, Peter put out the call to his friends in the crossword community for puzzleworthy headline anagrams. I chipped in a few ideas and was gratified to learn the other day that from the dozens of entertaining suggestions he received, he chose three to use in the puzzle and one of them is mine (at 1-Across and 69-Across, no less). I've solved the finished puzzle and it's a lot of fun.

The Week's year-in-review puzzle won't be available for another month or so. To tide you over until then, you might get a kick out of this.

From Peter Gordon, a guy who writes some of the world's best crosswords, here's The World's Worst Crossword: 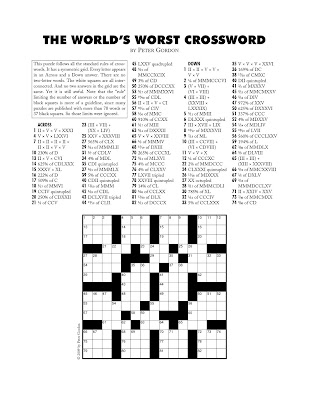 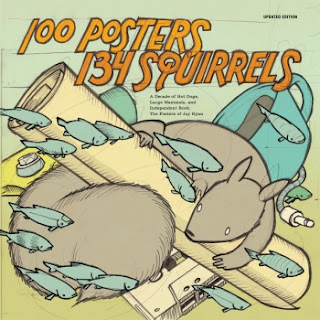 Every few years Jay compiles his recent work into a book. I've got the 2009 omnibus, Animals and Objects In and Out of Water, having known Jay since long before Wilco and Andrew Bird were vying for his services. (Then again, I once met Larry King, so don't judge your coolness against my towering standard.)

The 2005 compendium, 100 Posters/134 Squirrels, quickly sold out and went out of print. Happily, Jay has just updated it with additional commentary on each of the hundred prints, new photographs and a different cover. The rereleased book is now available at Jay's website.

Jay will be appearing this Friday evening at Quimby's Bookstore in Bucktown, Chicago to sign copies of the book and entertain questions about his artistic process. Check it out and you'll learn why he is in great demand as a guest speaker at art schools and poster art conventions around the country.

That he's a quietly hilarious guy only adds personality to the fascinating subject of how Jay creates his exemplary pieces of art -- he won't tell you, but he's the best in his field -- and what it's like to ply an old-school trade in the age of the iPod for America's leading rock stars and most tasteful poster collectors.

My Flavorpill preview is here.
Posted by Ben at 3:00 PM 2 comments:

From the halcyon days before the whole Conan "Tonight Show" fiasco, here are some brilliant then-writers for "Late Night with Conan O'Brien" on writing gags for their celebrity guests:

For some reason, the less I write this week, the more traffic I'm getting. I am trying not to take this personally.

In any event, since my efforts here are clearly pointless, I'm going to take a break until a year or two from now, at which point I ought to be up to about 10,000 readers a day.  See ya!
Posted by Ben at 12:52 PM 3 comments: 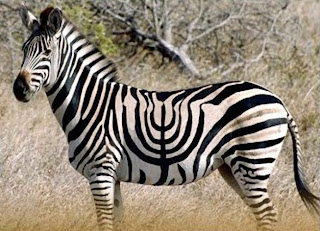