As the mercury drops, our attention turns to indoor entertainment. Let's discuss the PG-rated type.

The Chicago theater scene's traditional autumn kickoff is in full swing, both on the highly publicized stages of the Goodman, Steppenwolf and Lookingglass Theatres and in smaller venues throughout the city. Although there are literally dozens of options if you're looking for a night out, here are three solid choices as seen through the prism of my previews for Flavorpill Chicago.


Closing this weekend, and not to be missed if you're a fan of A Chorus Line, is this entertaining musical about its primary creator told largely through his own music: 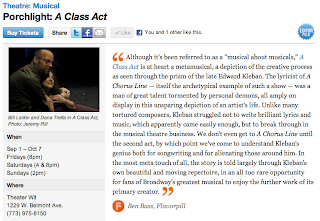 Next, if you're into Sherlock Holmes and/or Downton Abbey, you'll like the dastardly deeds and tender romance set in Victorian England in this adaptation of a classic Wilkie Collins novel:


The Woman in White at Lifeline Theatre 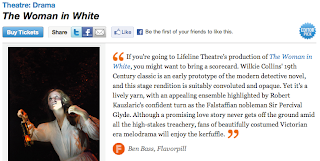 And finally, for my money, the best show currently playing in Chicago... 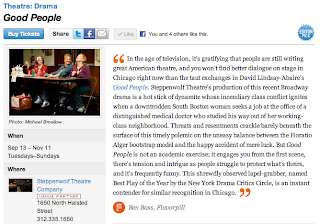 The Bears aren't always playing and there are good stories not being told on television. Get out there and support live theater; it will in turn enrich you.
Posted by Ben at 8:00 AM 2 comments: