This set of questions was more in my comfort zone than the previous two. I took a collar on both of those, first because of my poor defense, then thanks to my tepid offense. But today I got back on track.

1. Former U.S. Senator and New Jersey Governor John Corzine was Chairman and CEO of what international financial derivatives broker at the time of its bankruptcy filing in October of 2011?

Knew this one cold, having read weeks of daily coverage in the NYT, plus I've followed Corzine since he used $60 million of his own Goldman Sachs money to buy himself a New Jersey Senate seat. (Among other things, I know his first name is spelled Jon.) The firm is called MF Global. I would imagine MF is also short for what he exclaimed upon learning his firm could not find over $1 billion of its clients’ money. Business/economics is my opponent’s worst category, so I gave this one the 3.

2. Bobby Fischer became the first American World Champion of Chess in over 80 years after winning what became known as The Match of the Century, in Reykjavik, Iceland, in July and August of 1972. Name the Soviet defending champion that Fischer defeated in this match.

A gimme: Boris Spassky. Although games/sport did not look like my opponent’s forte either, I thought this one was sufficiently well known to merit a 1.

3. German-born Herbert Ernst Frahm escaped to Norway to avoid Nazi persecution in 1933 at age 19, and later gained international prominence as long-time mayor of West Berlin, and then as German Chancellor. To evade Nazi agents while in Norway, he adopted what pseudonym — the name by which he was known for the rest of his life?

A great story. The only problem was I couldn’t name the protagonist. Lacking a better guess, I said Helmut Kohl knowing it was probably wrong since he is so über-German. Sure enough, the correct answer was Willy Brandt. I’d heard of him but didn’t know much about him, and if I’d had another month I wouldn’t have even thought of him. 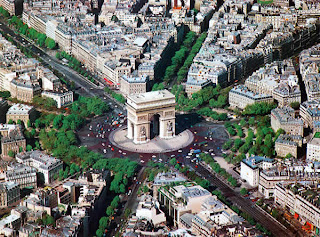 4. The massive thoroughfare junction pictured here is named formally after whom?

Even if I hadn’t been to the Place Charles de Gaulle, there’s a good chance I would have guessed him anyway. It’s like guessing Pope John Paul II in the original Trivial Pursuit. I guess there’s also Napoleon or Joan of Arc, but really, isn’t he like the #1 French national, their Churchill? It was more likely to be a Gallic hero and it wasn’t Etienne Elysée or Thierry Triomphe. I wasn’t sure how well known this was, but gave it a 1 because it was so guessable. 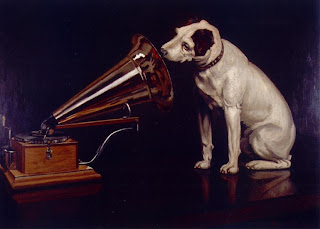 5. What is the title of this famous painting?

I’ve known it since I was a kid: His Master’s Voice. That is what makes the dog curious about the sound coming out of the phonograph. It’s been used for so long to promote RCA Victor that it’s nearly outlasted those brands. Although the Victrola was already archaic when I was a kid and the Radio Corporation of America name is also fixed in the past, the RCA side is still somewhat current as long as they continue to manufacture electronics. The RCA Championships summer hardcourt tennis tournament in Indianapolis, a U.S. Open warmup event that annually played host to Sampras and Agassi in their prime, used to promote itself with the RCA dog, Nipper. His puppy son, Chipper, eventually got into the act too.

6. The title character of this long-running television drama series, a graduate of Harvard Law School, had several notable comic peculiarities, including an affinity for driving a Ford Crown Victoria (three models over the course of the series), a fondness for hot dogs, and an allegiance to wearing gray suits in the courtroom (where he was virtually always victorious).

This is an example of how the endless cluing in a LearnedLeague question can eventually get you home. Reading this question, I was like: “Harvard Law School? Jonathan Rollins from L.A. Law? No, wait, he wasn’t the title character, and he didn’t have comic peculiarities. OK, reading on… Ford Crown Victoria… no clue… hot dogs… no clue… doesn’t sound like Perry Mason… I don’t think he went to Harvard or ate hot dogs… gray suits in the courtroom… oh, it’s probably Matlock.” I don’t think I have ever seen an episode of this show, but it ran seemingly forever and every single time I flipped past the show or saw the character depicted in a commercial, it was always Andy Griffith in the same pale gray suit. Either he had one of them or a hundred of them, but that was his uniform. I thought the gray suit was enough of a giveaway to give this question the 0, particularly because the show was a big hit and my opponent was well versed in pop culture.


Speaking of my opponent, it was Marc Spraregen, a friend from the National Puzzlers’ League. I know him as a Californian, a good trivia player and a very nice guy. It was hard to play defense against Marc because he’s strong in a lot of categories, I don’t know him that well, and it was tricky figuring out what he (or a lot of people for that matter) would or wouldn’t know from this middle-of-the-road set of questions. In hindsight Willy Brandt feels like the toughest one, since MF Global is such a current and heavily covered story, but it’s too late to adjust my defense now. All I can do is hope for the best.
Posted by Ben at 12:05 AM

1. Remembered the story, or The Daily Show's coverage of it, but couldn't remember the name of the company. I put MORAL HAZARD R US.

2. Fischer-Spassky, a gimme, I agree. The odd thing is that about two weeks ago I took the trouble to investigate Fischer's original "match of the century," which happened in like 1955, even to the point of reading the game notation/accounts of the game, to understand what was so mind-blowing about it -- definitely worth 10 minutes if you're interested. So that threw me for like a nanosecond, but ... Spasskly.

3. I wasn't 100% sure about this one, but my mom was from Austria and a dyed-in-the-wool Socialist, so Brandt had some meaning for me. It was a guess, but a good guess, and turned out to be right.

4. Yeah, de Gaulle, who the hell else they gonna pick?

5. Yeah, HMV stores are named that because of this, right?

Congrats on getting chosen as a BWA.

And speaking of trigrams, nice WIN.

Why I gave a fellow NPLer (Joe Cabrera, Toonhead!) a 3 on a chess question, just because *I* couldn't remember it, I'll never know. Tied.

Wait, was that chosen as a BWA? I don't see it on the Twitter feed. Where are you seeing this?

You can see the full complement of BWAs on the league website by clicking around the individual questions. I think the Twitter version is more intermittent highlights.

Oh my God! Found them! You have just improved my life!

I've been idly meaning to post BWAs here during the weekend lulls between match reports, but I haven't started doing that yet. And if I do it will probably just be a few highlights that I like the best, so you'll still be better off going to the source.