Another day, another match against a super-smart trivia expert and great guy I know through puzzle circles. I had to rock out just to give myself a chance:

1. The scientific order lepidoptera contains an exceedingly large number of insect species, all members of which are commonly known by one of two names. Give either one.

You say lepidoptera, I say Vladimir Nabokov collecting butterflies. I figured the other group had to be moths, and indeed it was.

2. What is the formal name of the title held by the UK Cabinet Minister (currently, George Osborne) whose post is the rough equivalent of Germany's Federal Minister of Finance, and the U.S.'s Secretary of the Treasury?

Chancellor of the Exchequer. You either knew this or you didn’t. I did, and I knew my opponent would too. Between the 2003 Iraq invasion and the 2008 financial meltdown, there have been some fairly well publicized opportunities to learn or be reminded of who minds the chequebook for the UK. 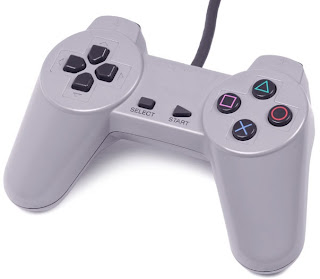 3. This (slightly edited) image shows the control pad for the first version of what video game console?

Sony PlayStation. It was pretty much a ripoff of the classic Nintendo Entertainment System controller, with the four-way directional on the left and the Select and Start and what have you. You’re not fooling anyone with the weird symbols on the buttons, Sony.

4. Identify the diplomat who was named Time magazine's Man of the Year in 1978 and in 1985 -- the only Chinese national to receive the designation on two separate occasions.

This is the one I really had to sweat out. Outside of FDR, Hitler, Churchill, and other similarly huge players on the world stage, it was hard to imagine anyone being named Time Man of the Year twice in ten years. And the words “diplomat” and “Chinese national” were confounding. Was the person a Chinese-born American diplomatic figure like the German-born Heinz “Henry” Kissinger? It was an interesting theory, but I knew of no one like that from China, and I felt confident that I would have if they’d been named Time Man of the Year twice. Was a head of state a “diplomat” for the purposes of this question? I was at a loss to say who was the Chinese leader in the 1970s, but remembered Deng Xiaoping as Reagan’s counterpart in the 1980s. How long had he been in power? About all I knew for sure was that the time period in question was too late for the answer to be Chiang Kai-shek or Sun Yat-sen.

Eventually I decided that maybe Deng had been the point person, diplomatic, political or otherwise, when Nixon opened China to the West in the early 1970s, which for all I knew was what helped him rise to the top job later if he didn’t have it already. I couldn’t come up with a better guess during the time period in question, so although I had my doubts that Deng had been Time Man of the Year twice, I went with him anyway (after briefly considering giving up and trying for a Best Wrong Answer for the first time ever). To my happy surprise, Deng Xiaoping was the correct answer. I may or may not have pumped my fist.

5. Dante's Divine Comedy is an epic poem divided into three canticas. The first is Inferno; what are the other two?

Purgatorio and Paradiso. Dante’s tour goes through Hell, Purgatory and Heaven. Add it all up and you’ve got one wacky divine comedy! I read it in college. Also could have handled other Dante-related trivia including What was Dante’s last name? (Alighieri), Who directed Gremlins? (Joe Dante) and Who was Tony Soprano’s pompadoured consigliere? (Silvio Dante).

My opponent's stats were eerily similar to my own, and although he was strong in literature, I gave this one the 3 in the hope that he might know Dante’s Inferno was part of the Divine Comedy, but not know the names of the other two sections.

6. What is the title of the classic German horror film from 1922 which is subtitled eine Symphonie des Grauens (A Symphony of Horror), and stars Max Schreck as the Transylvanian Count Orlok?

The early classic vampire movie: Nosferatu. I’ve never watched it, but I’ll always know it, having seen E. Elias Merhige’s Shadow of the Vampire. John Malkovich plays embattled Nosferatu director F.W. Murnau and Willem Dafoe plays Schreck as a "pre-Method" actor so intense that he acts like a vampire throughout the shoot, and may in fact be undead altogether. I knew my opponent would know this one so I gave it the 0.


Speaking of today’s opponent, it was John Chaneski, a very funny guy and leading puzzle expert who is one of the creative minds behind the upcoming National Public Radio quiz-variety show “Ask Me Another.” They’ve been taping episodes live at the Bell House in Brooklyn for broadcast this spring and summer, and from what I hear it's going to be a lot of fun (check it out, New Yorkers!).

John is a trivia maven, NYU theater alum, crossword guru, musical talent, puzzle writer, and New York City man about town. I like pretty much everything about the guy except for the fact that he too “drank the beer” by getting all six questions correct today (as did yesterday’s opponent, Tyler Hinman; fellow friend of this blog and rundlemate Joon Pahk; and my buddy Martin, scoring his first-ever sixpack in his rookie season). Therefore, it didn’t matter how John and I played defense. We were destined to tie.

Mr. Chaneski has had either three or four correct answers in every other match he’s played this season, but on this relatively easy par 3, he fired it at the stick and made the short birdie putt. (Today you have to kick ass?) Well played.
Posted by Ben at 1:00 AM

My first ever six-pack! *blows kazoo*

I'm a little embarrassed to say I didn't sweat any of them. I happened to know that Deng was twice Man of the Year, so that settled that. I was on the verge of putting "Nintendo" down, when I remembered that even though I seldom play such games, I did briefly own a Sony Playstation in the late 1990s, and the controller looked just like that! What do you know!

The Deng thing is interesting. Mao was never Man of the Year (I went and looked that up, after submitting), and as I understand it Deng was MotY mainly because of the economic liberalization he ushered in during his regime, but what makes that weird is that China's economic growth has been on everybody's lips recently, for trends that start really after Deng left office. Come to think of it, Time has historically had a bit of a China thing (Luce was the son of a missionary in China, or something), and it occurred to me only while writing this note that the over/under on MotYs for the person who put an end to Mao's reign of insanity was probably about 6, so really he underperformed.

Describing Deng Xiaoping as a "diplomat" seems odd to me. He never served as an ambassador or foreign secretary or whatever they call that position in China. If I were writing the question I would probably have called him a "politician."