I did pretty well on the questions I actually answered: 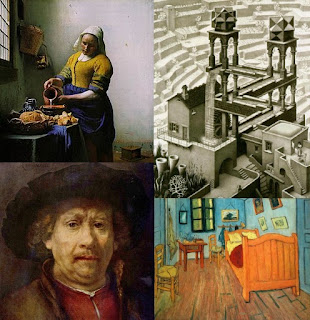 1. This image is a montage of works from citizens of what country?

Pretty easy to say it was the Netherlands given the Van Gogh painting. The Rembrandt self-portrait confirmed it thanks to his last name, van Rijn. I was familiar with the Escher illustration but wasn’t sure of his nationality. Gave this question the 0.

2. Of Canada's ten provinces, which one is, by far, largest in land area (and about 240 times larger than the smallest, Prince Edward Island)?

The Canadian map is a vague blur in my mind. I knew Quebec was enormous from its past threats to secede from the country because that would have taken a big chunk away from Canada, so I figured the correct answer might be either Quebec or the vast wasteland north of the lowest tier of provinces. Unfortunately I wasn’t sure if the latter was the Yukon Territory or the Northwest Territories. North of the better-populated province names that tend to follow the names of cities, it was all tundra to me. (I wasn’t exactly confident on the lower provinces either in terms of how the middle ones were arranged east of British Columbia, but I knew they weren’t the biggest.) I guessed Quebec without a lot of confidence and it turned out to be correct.

3. This is a term in French cuisine for a particular dish consisting of coarsely chopped meat and/or vegetables -- a sort of jellied meatloaf, similar to pate. The same term is used for the cooking vessel in which the meatloaf is prepared.

I speak French, I love to eat, I've been to France twice and I feel like I know a little bit about French cuisine. But for the second time in two seasons, I couldn’t come up with a term from French cooking that I knew would look familiar when I saw the answer. The first time we had to identify the other type of broth besides bouillon, which turned out to be consommé. This time not only couldn’t I come up with the answer, I was so focused on how I should play defense that I failed to notice I hadn't filled in the blank on this question before I turned in my answers. I think it was the first time I’ve ever passed on the chance to take a guess, not that I would have gotten this anyway. Just like consommé, I did know the term ("terrine of beef," for example, is the kind of thing you read in published reports of White House state dinners).

When confronted with a question they know they can't answer, a lot of players in the league try to be funny with their guesses, competing for the honor of being chosen as a “Best Wrong Answer.” (Many of them are quite amusing; in fact, I should probably start including them here.) Yet as much as I love to crack jokes, it’s not worth it to me. I’d rather take a guess and have even a faint chance of getting it right.

4. The military personification of the confederacy during the U.S. Civil War was known as Johnny Reb; who was Johnny Reb's northern counterpart?

Learned this in school and never forgot it: Johnny Reb and Billy Yank. Johnny Reb enjoyed a brief resurgence in the mid-1980s, appearing twice in the lyrics of the R.E.M. song “Swan Swan H.”

5. An Englishman named David Ogilvy, who died in 1999 at age 78, is widely considered a pioneer and vanguard in the evolution of what industry?

Pretty easy if you’re familiar with the advertising firm of Ogilvy & Mather, pretty hard if you’re not. Ogilvy is one of the many ad shops that have an office here in Chicago. Our most notable homegrown example is Leo Burnett, founded by and named after the industry legend who created the Marlboro Man, Tony the Tiger, the Jolly Green Giant, the Pillsbury Doughboy and Morris the Cat.

6. Decompression sickness, known as the bends and suffered commonly by deep-sea divers and aviators, is caused when a gas comes out of solution and forms bubbles in body fluid and blood during a quick ascent. Most commonly, this gas is what element?

I couldn’t come up with beryllium on Friday, which cost me a win, but this one was a total gimme: nitrogen. After knowing a fair amount about certain questions lately (e.g. the Buddy Holly plane crash) but not getting any points for it, this one was a refreshing change of pace. The one thing I knew about the bends was that it involved nitrogen bubbles in the blood caused by rapid ascent. To my relief, that was what they asked for this time.


Trivia Is Everywhere Dept.: The other day I mentioned seeing a Matt Kenseth television interview a few hours after incorrectly answering a question about who had just won the Daytona 500. Then this morning, the following appeared in my Today's Headlines email from the New York Times:

ON THIS DAY
On March 6, 1857, in its Dred Scott decision, the Supreme Court held that Scott, a slave, could not sue for his freedom in a federal court.
Posted by Ben at 6:00 AM

I will put down a funny answer only if I really and truly have no way to make a guess that might be right. I may start calling this the "Billy Yank line", as that was a 100% pure no-knowledge guess on my part, and holy crap that's the right answer?!?!