Day 24: Playing out the string

After suspect defense cost me a few wins or ties this season, I was clutch yesterday when it mattered the most. By allowing my opponent the minimum 1 point for his two correct answers (0 for Grease, 1 for pampas), I escaped with a narrow victory by scoring 2 points on the same questions (Grease 0, pampas 2).

When the strong player just below me, who outranked me throughout our rookie season, suffered a rare loss, my lead increased and I clinched a promotion to a higher group next season. With the eleventh-hour drama eliminated, at least for promotion as opposed to relegation, most of us in my highly competitive division are now just playing out the final two days of the campaign.

But that’s no reason not to keep doing as well as we can, and after yesterday’s black diamond run, I welcomed today’s return to a green dot trail:

1. One of the most widely recognized 'constructed words', created to demonstrate irregularities in spelling in the English language (and, in some cases, the need for spelling reform) is the fake word ghoti, which is a re-spelling of (and thus pronounced like) what common word?

A gimme. Fish. GH as in rough, O as in women, TI as in nation. You either knew it or you didn’t. I did and I bet you did too.

2. In Rudyard Kipling's short story Rikki-Tikki-Tavi, what type of animal is the title character?

A gimme, for me at least: a mongoose. A lovable, crafty mongoose who battles a menacing, scary cobra. I’ve never read the book but I loved the animated version on TV when I was a kid.

3. This term was used in Ancient Rome to refer to a resident of the Roman province of Arabia, and by the time of the Crusades had evolved into a term for any follower of Islam.

Didn’t know it, guessed Muslim knowing it had to be wrong. I was vaguely familiar with the answer, Saracen, but would never have come close to thinking of it if I’d had another week. My first thought when I saw the answer: “Joon Pahk is going to get this.” Because I was not playing against Joon, I gave this the 3.

In the Mood. Glenn Miller. I love this song and always have. It gives me fond memories of the old-time radio my brother listened to when we were kids. E.g., Chuck Schaden’s show and Carl Amari’s When Radio Was. They don’t make radio shows like they used to.

5. A 6 foot 3-1/2 inch tall white rabbit is the title character of what Pulitzer Prize-winning play from 1944?

I knew it from the Jimmy Stewart movie, not the play: Harvey. My opponent was generally strong in pop culture so I gave this one the 0.

As it happened, I had once entered "Harvey Milk, Twinkie defense" into the same blank on the website form, and that full answer popped up as I typed the word Harvey. Not exactly the predictive text Jordan Rubin was talking about, just an interesting coincidence. 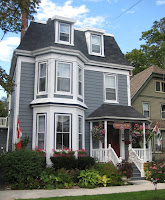 6. The type of roof on this building is known simply as a French roof, but is also known as what, after the 17th c. French architect who first popularized it?

Knew it immediately: mansard roof. I hope they ask a question next season about berms because along with mansard roofs, berms are something I hear my mom talk about that no one else ever does. Now that I’ve made that point, of course, they’ll never ask about berms. What can I say? Very Important LearnedLeague People read this blog.

There are a lot of promotion and relegation spots at stake throughout the league in the final few days of the season. If you're one of the many players fighting for position, good luck to you.
Posted by Ben at 12:05 AM

I got 3 against an opponent who has forfeited 20 times this season, including an impressive 19 times in a row. I think I got this one.

1. Yep, fish. George Bernard Shaw, which Wikipedia insists isn't the source. Fuck those guys, it's GBS to me.

2. I remember watching that movie in our local library. Makes quite an impression.

Kipling's 'Rikki-Tikki-Tavi' is a short story, not a book...and I'm sure a cartoon could not do it justice. When I was at Girl Scout camp on Oahu as a preteen, the primary problem was keeping one's goodies away from these clever little thieves. (Of course, there are no snakes in Hawaii. No doubt R-T-T's cousins would take care of them in short order.)

Congrats on your performance. Oddly, even I would have gotten all of these answers. But here is another question: why does your mother go about bandying terms like 'mansard' and 'berm'? Is she an architect?

No, just knowledgeable with a big vocabulary. Upon reflection, I think I've heard my dad describe the occasional property as having a mansard roof. Apparently I was inadvertently bred to play in a trivia league.

ha! i did, in fact, get saracen, and was surprised that it scored so low across the field. then again, i missed in the mood and mansard, and lost 4(4) to 5(3) when my opponent defended me perfectly (which, admittedly, isn't that tough to do) and came up with a surprising 3-pointer in by far his weakest category, music. oh well.

it doesn't really matter except to decide 2nd place. the captcha in this comment box says "itison", but i think it is not on. you're welcome to have 2nd if you can take it; i didn't exactly shine on d25 either.

i said moor for the roman question. still wasn't right. i managed to win anyway, and hold on to my second spot. fingers crossed on today...

> My first thought when I saw the
> answer: “Joon Pahk is going to get
> this.” Because I was not playing
> against Joon, I gave this the 3.

I had the same thought -- and because I was playing against Joon, I made it a 1. Then (as mentioned) I finally got a music question right this season. I feel pretty lucky to have escaped with the upset.

Best of luck to the both of you in Rundle B!