Of course you do (or should). And so you might be interested to learn that the New Yorker has recently begun hosting a Twitter-based game show, which they're calling Questioningly. It's the latest technology on the bridge of a sailing ship that has navigated the narrows between the nostalgic and the au courant since its christening in 1925.

Every Friday, the magazine's Culture Desk blog both posts and tweets a new challenge that players have all weekend to tackle. Since contestants enter the fray via Twitter, 140 characters are all they get — fewer, really, since entries must include the hashtag #tnyquestion — which puts pithiness and wit at the premium they generally deserve.

In turn, the questions have tended to be short, open-ended setups for clever jokes and apt observations:
The contest runs through each weekend until Monday morning, when a winner is crowned along with a retinue of honorable mentions.


The Alex Trebek of this enterprise is Ben Greenman, a noted author and humorist who works a day job as a New Yorker editor. He writes the Questioningly blogposts and, one suspects, has a major if not the only say in picking the winners.

Regular readers of this space may have noted my personal fondness for the New Yorker, pop culture, and witty humor (mostly others', sadly); my recent acquisition of an iPhone 4S; and my recent habit of tweeting at @BenBassBeyond. Add it all up and I have entered the contest more often than not.

My tireless efforts were rewarded this past week when I got my first honorable mention. Players were asked to name a new phobia; I got hosannas for "Arachnophobiaphobia: Fear of having nothing better to watch than a commercial-interrupted 1990s movie on basic cable."

Even better, I also tweeted a joke about an obscure Talking Heads album that was immediately improved upon by my old friend Jackpot England. Not one but both of his pop music-themed entries got honorable mentions in the same breath as mine. Check out Ben Greenman's entire writeup here.

And more broadly, visit the New Yorker's Culture Desk blog here to check out the latest Questioningly, enter and win!
Posted by Ben at 4:00 PM 3 comments:

Jane's Addiction and Franz Ferdinand are playing a special Lollapalooza after-show concert at the Aragon Ballroom in Chicago on Saturday, August 4.  Tickets (just $15) will go on sale this Friday at 10am Central time.

Complete info in the Jane's Addiction press release after the jump:

Just for the record

I recently covered the 4th annual Just For Laughs Chicago comedy festival for the going-out guide Flavorpill.  JFL CHI continues to grow in both size and quality, and this year's go-round was creatively and commercially the most successful to date.

Although the festival has wrapped, these headliners continue to tour and may be coming soon to your city, so here's my take on four of the best players in the game. 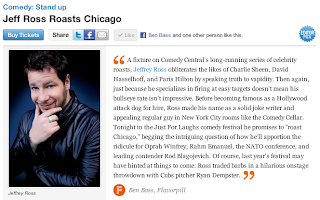 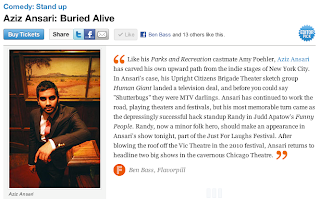 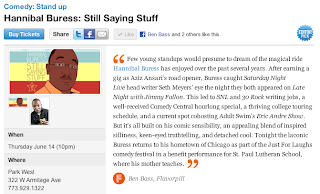 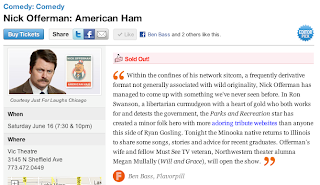 From the campaign trail...


Romney's Numbers Skyrocket After Prostitute Reveals She Paid Him To Sleep With Her
Posted by Ben at 6:00 PM No comments: