For the second time in a few days, my defense was so poor that I handed my opponent a tie.

1. What is the last name of the family who, with their house staff, are the main subjects of the television series Downton Abbey?

I’ve never seen the show but have certainly heard the hype, including the runup to Season 2 a few weeks ago. I was briefly tempted to jump in at that point but decided a better move would be to start from the beginning. It reminds me of a Thanksgiving weekend my family once spent in Breckenridge, Colorado visiting my then-postcollegiate-ski-bum brother. There was a copy of the recently released third Harry Potter book laying around our coffee table the entire weekend. Although I was constantly tempted to read it, having heard how great the books were, I knew I’d be better off starting the series from the beginning. Upon returning to Chicago, I did just that and my patience was rewarded.

Anyway, no clue on the family’s last name. All I could do was guess something suitably stuffy and British-sounding, so I went with Chesterton despite a vague memory (likely from the NYT review) that the family’s name wasn’t that lengthy. Sure enough, the correct answer was Crawley.

2. What is the world's most populous primarily Spanish-speaking country?

My buddy Mike was exactly right when he said this was “trick-easy.” I sweated this out for what felt like forever. Mexico seemed like the obvious answer. Mexico City alone has well over 20 million people, there are other significant cities, and the nation is fairly large.

But then I started thinking about South America: what about Argentina? Buenos Aires was pretty big, wasn’t it? I wasn’t sure how big or populous the nation was beyond B.A., but Argentina had that seductively just-off-center “correct LearnedLeague answer” feeling. Then a gaucho named Venezuela came riding over the horizon. A friend from Caracas has told me how overcrowded that city is. Maybe the whole country is like that? My inability to think of a single large city other than the obvious one in either Argentina or Venezuela made them feel like also-rans.

Looming over all of this like the Death Star was Spain, what with Barcelona and Madrid, not to mention the extended family of Rafael Nadal that all live in the same large apartment building they own. Would the league ask a question whose answer was buried in the question itself? I would feel pretty silly failing to answer a riddle about a chicken and a road whose answer was “to get to the other side.”

Eventually I decided to ride my favorite horse, Mexico, even though I was far from confident about it, and was thrilled to see I’d made the right call. I gave this one a 1, but frankly anything from 0 to 3 would have been justifiable. I couldn’t figure out if it was easy or difficult.

3. In the Apollo 11 space mission, where humans walked on the moon for the first time, the Lunar Module was named Eagle. What was the name of the Command / Service Module, manned by Michael Collins during the landing itself (it would not be the last NASA craft so named)?

Didn’t know the answer and made a horrendous guess: Rover, hoping to shoehorn into the final part of the question the Mars Rover that would come into prominence much later. There were two enormous problems with this guess: 1, considering that it was the Eagle that famously landed, the Command / Service Module probably wasn’t even landing anywhere, much less roving anything; and 2, since we were going for a companion nickname to Eagle in the context of fulfilling President Kennedy’s promise that the U.S. would reach the moon, preferably ahead of the Soviets, the correct answer was likely to be something more patriotic than what Ward Cleaver would name his dog. Liberty, Patriot, Freedom, United, something like that. I probably wouldn’t have guessed the correct answer, Columbia, but I’d like to have given myself a chance to.

4. Cray, Burroughs, Eckert-Mauchly, and Wang are all names of current or former companies whose business was the manufacture of what?

Gimme: supercomputers. Wasn’t 100% sure all four of these made supercomputers as opposed to computers (though I knew Cray did) so I guessed computers and it was deemed correct. In fact, the correct answer was simply computers. I gave this the 0 on the flawed theory that my opponent would also know it.

5. The title characters of Alexandre Dumas's The Three Musketeers are Athos, Porthos, and Aramis, but the story tells the tale of what other adventurer, as he travels to Paris to join the prestigious Mousquetaires de la garde?

I actually referred to Athos and Porthos on this blog the other day. At the time, I was misremembering that D’Artagnan was the third Musketeer. In fact, Aramis was the third and D’Artagnan was the main protagonist. But either way, I knew there was a D’Artagnan, which got me through this question. This was the converse of my two failings the other day, where I forgot that I needed to use the integral of a parabola to measure its area, and couldn’t come up with the Iraqi Prime Minister’s name although I’ve seen it repeatedly. This time, although I’ve never read The Three Musketeers, I knew some basic trivia about it, just like I scored a point last season by knowing a fair amount about the movie Breakfast at Tiffany’s without ever having seen it. I assure you that it feels a lot better to be able to identify the basic details of books and movies you’ve never read or watched than to forget things you ought to know. 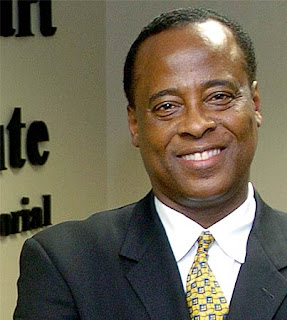 Not only did I have no clue who this was, I didn’t even know who he was when I read the correct answer. I guessed Jones in the hope that I would luck into a miracle, but the answer was Conrad Murray. I had to Google that to be reminded that he was the doctor whose brand of medical expertise didn’t do much for Michael Jackson. Giving this one the 3 was a highly suspect move in that my opponent only answered two questions correctly and this was one of them.


What I will charitably call my “defense” could not have been worse. I gave my opponent a 2 for Downton Abbey and a 3 for Conrad Murray, so he scored 5 points on just two correct answers. His defense wasn’t great either in that he gave me a 0 on Conrad Murray, which I missed, and 2, 2, 1 for the three I got. In the end, middling defense with two correct answers was as good as disastrous defense with three correct answers. Considering that we both deserved to lose, I guess I should be happy with a tie.
Posted by Ben at 12:00 PM

bad luck, ben. you definitely put your 2 and 3 on the toughest questions.