This was the easiest full set of six LearnedLeague questions I can remember offhand. Apparently not for everyone, judging from what a few friends had to say, but certainly for me.

Even the several times I’ve been lucky enough to run the table before, I've usually had to sweat something out, such as Deng Xiaoping the other day, but on these questions I barely paused. They just played to my strengths. No weird geography? No long-ago world history? A nice fat SAT math question? A rock and roll question? Another one where knowing rock and roll helped? A Muppet, for crying out loud? They might as well have asked for my birthday and my mother’s maiden name. 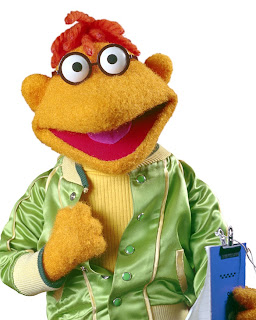 Scooter is well known to a generation of Americans weaned on The Muppet Show, particularly those of us who know The Muppet Movie inside out. Although I didn't know how old my opponent was, I gave this question the 0.

Scooter, you are the man. I always appreciated your earnest enthusiasm.

2. The Live Aid concert, which took place on July 13, 1985, was held simultaneously in two cities — London, and what U.S. city (with Phil Collins famously appearing at both venues)?

The other day, upon reading a question about lepidoptera, I knee-jerked to Nabokov and butterflies. Same thing with this question. It’s sense memory (Speak, Memory). You say Live Aid, I say Bob Geldof, London, Wembley Stadium, Philadephia, Mick Jagger and Tina Turner, U2, African relief. Read enough about these things over the years and the factual bullet points just run together in your mind. Plus, in the case of Live Aid, I remember it firsthand.

I taught SAT verbal, not math, for the Princeton Review, but like most people I did better on the math and in any case this one wasn’t too hard. The key was to use the radius, not the diameter, of each circle, and not to leave pi out of the answer. The area of the big circle was 3 squared times pi, or 9 pi. The other circles had areas of pi and 4 pi. So the answer was 9 pi - 4 pi - pi, or 4 pi. Or as I put it in my answer blank because I was so afraid of screwing it up, “4 times Pi.”

4. This term is applied generally as a classification of art which intends to represent its subject matter in objective manner, and specifically refers to an artistic movement which emerged in France in the mid-19th c., represented by the works of Gustave Courbet, Jean-Francois Millet, and Honore Daumier.

Although I have seen their paintings in museums, if you had asked me “Courbet, Millet, and Daumier. What artistic movement?”, I would probably have gotten this wrong. But the question totally gave away the answer. I knew Realism was an actual school of painting, and “intends to represent its subject matter in objective manner” was easily enough for me to think of it. I did stop briefly to consider analogous terms like Objectivism or Representationalism, but these words were in the question itself, and Rationalism felt more like a philosophy than a school of painting. Realism was the only guess that made any sense to me, and it was correct. (A friend later told me that he guessed Naturalism, and I'm glad I didn't think of that, because it was also a very good guess.)

5. The Indo-Pakistani War of 1971 lasted only 13 days, but resulted in the creation of what new independent nation?

Between the newness of the nation and the geography, I strongly suspected the answer was Bangladesh. I couldn’t think of a better guess then that. When I thought about one of the only things I know about Bangladesh, namely that George Harrison and Ravi Shankar organized the Concert for Bangladesh fundraiser shortly after the Beatles broke up, the 1971 told me Bangladesh had to be correct, and it was. I gave this question the 3. 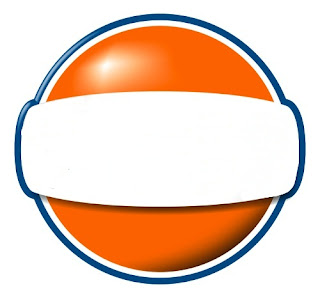 6. The name of what corporation has been redacted from this logo?

You either knew it or you didn’t, and I did. Gulf Oil.


Now all I need is for my opponent to miss two questions, or just miss something other than Scooter, so I can have a better result than I did the other day when John "Chainsaw" Chaneski and I split a 12-pack. Meanwhile, I'll enjoy the easy cruise while it lasts. Tomorrow, I trust, I'll be back to embarrassing myself by not knowing anything about the history of England.
Posted by Ben at 12:05 AM

tough luck, i guess. but better a draw than a loss.

it'll be interesting to see tomorrow's doubly-blogged match. the pressure is on.

I think you're right, it basically was an easy day. The bad news is I blew two questions out of sheer stupidity -- the good news (I guess) is that my opponent drank the beer, so it wouldn't have mattered that much.

The stats on the round are really interesting, all of the questions finished between 49% and 66% correctly answered, so there were no real "easy" or "hard" ones, they were all moderately gettable -- and moderately missable.

1. Scooter's pretty easy, esp. if you watched the original Muppet Show on network TV, as I did.

2. Again, if you were paying attention in 1985, pretty easy. I sent them money that day!

3. Blunder #1 -- yep, I used the diameter figure in my calculations, so my result was 4x too big. Stupid, stupid. I even made a mental note of dividing the diameter before I went to do my calculations -- and then promptly behaved as if I had not made such a mental note. Also, I couldn't remember that such circular area sums can be subtracted so easily, so I did the arithmetic -- pi(r)^2, or in my case, pi(d)^2, which yields the utterly unimpeachable figure of 50.24. If you're dead set on doing the question wrong, that is. Oh well. At least I "knew it," even if I did slip up on a procedural matter. That sort of thing is fixable. Sheer ignorance is a bit trickier.

4. My other error. I actually had Realism put in the slot and replaced it with Naturalism -- then thought better of it and decided the clue was really asking for Realism, as you observed. I dozed off around this time, and after I woke up a few minutes later, couldn't see anything wrong with the answers I had down, and hit enter. If I'd given it a few hours, I probably would have drunk the beer.

5. To me this is dead easy, and the Harrison connection is mere assistance. Bangladesh is the country that used to be Pakistan (only not contiguous to it), period. If you know that, it's the only possible answer.

6. This one was so easy that I found myself questioning it. Notice that there's a little nick in the blue border on the left side, possibly suggesting that the swoop of a cursive letter had intruded. That threw me for a few minutes, but Gulf seemed the only possible answer. I half-expected SONIC or something to pop up in the answers, so I was a bit relieved.

Players leaguewide answered 57% of these questions correctly, but in both your rundle and Joon's/mine, a robust 66%. Without a truly hard question -- by which I mean something that few people either know or have a shot at figuring out -- any given player threatened to drink the beer. It was a points-fest.

BTW, I learned I tied from Joon's comment above. Ugh.

No "points-fest" for me, thank you. Too young for Live Aid, too history-ignorant to know Bangladesh is that young (thought maybe Sri Lanka, which is at least India-adjacent if not Pakistan-related), and in New York City there are no gas stations. Seriously, I don't ever remember seeing that Gulf logo in my life!

I put "4" for the math question, thinking the Pi would cancel out. Whoops. (Enjoying this blog, by the way, as an LL rookie this season)