David Letterman: "Angry crowds in Tripoli are marching to get rid of dictator Moammar Qaddafi. Unfortunately he is going to be replaced by his idiot son Moammar W. Qaddafi."
Posted by Ben at 4:00 PM No comments:

Pawar to the people 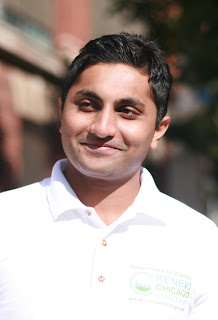 I live in Chicago's 47th Ward, which just elected the city's first-ever Asian-American alderman.  (I consider myself one-8520th responsible.)

The Fighting 47th is Dead

Pawar, who will be the city’s first Asian-American alderman, grew up in the suburbs, and got interested in politics while studying in the State Department’s Critical Language Program in Jaipur, India. He defeated a hefty Irish ward heeler named Tom O’Donnell, a former chief of staff to Ald. Eugene Schulter. Schulter filed to run for re-election, then retired abruptly in January, and tried to hand the seat to his protégé. It’s an old Chicago trick that prevents independents from organizing.

That would have worked back when “The Fighting 47th” was controlled by Ed Kelly, the powerful park district chief and confidant of Richard J. Daley. Kelly put Schulter in the alderman’s office in 1975. He needed a kid with a Teutonic name. In those days, the Davis Theater still showed movies in German.

The Davis Theater is still there, but it’s showing The King’s Speech. There are still a few quaint German restaurants and butcher shops, but Lincoln Square has been taken over by independent bookstores, fashion eyewear boutiques, coffeehouses and indie record shops. On sunny afternoons, it has more strollers per square foot of sidewalk than any neighborhood in Chicago. The thirtysomethings who bought there first homes there are far more likely to relate to Pawar’s suburban upbringing and globetrotting career than O’Donnell’s membership at St. Ben’s.

The 47th is Rahm Emanuel’s home ward (or will be, as soon as Rob Halpin’s lease expires.) He got 11,218 votes there, his second-biggest total in the city. The argument that he’s not a real Chicagoan because he went to New Trier, danced ballet and worked in D.C. meant nothing to Lincoln Square, because those people went to Wheaton-Warrenville South, go to yoga class on Saturday mornings and did their internships in New York. Rahm is their kind of Chicagoan. Chicawgo guys like Tom O’Donnell and Gery Chico represent fading local folkways the North Side’s city-hopping young professionals disdain. Chico ran up his best numbers in white ethnic wards on the Northwest and Southwest sides, where people still eat hot dogs, not Hot Doug’s.

I know more than one Chicago native who feels a sense of alienation at living on the Lakefront.

“It seems like hardly anyone in my neighborhood is from Chicago,” I heard from a woman of good Chicago Polish stock, who now lives in Ukrainian Village. “It’s the exception nowadays.”

The Fighting 47th is dead. It’s the capital of Rahm Emanuel’s Chicago now. 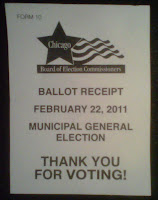 Not in my house

Ever wish you could hear an oracular druid's grim proclamations about the sweet release of death, cast against the glib, cocky patter of an ESPN SportsCenter anchor?

Onion SportsDome
Posted by Ben at 5:00 PM No comments:

The uncapitalized version has been popular for millions of years, and now Steppenwolf Theatre Co. is putting it on stage. (A play by said title, that is.) I caught the show recently and found it timely and thought-provoking. 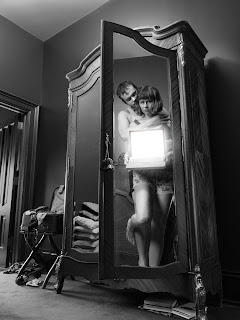 Monica Westin's Flavorpill preview is here.
Posted by Ben at 1:00 PM No comments:

Chester Hanks is known by many names. His friends call him Chet. The media call him “the son of actor Tom Hanks.” This week, he’s officially christened as Chet Haze.

That’s his rap name, now revealed on a track making its rounds online — a song celebrating the wild party life at Northwestern University in Evanston.

“Any kids really living the college life can relate to it,” Hanks, 21, said in an interview with the NU student newspaper. “I don’t think it’s something that should cause anybody to be angry or offend anyone.”

Hanks’ mom is Rita Wilson, the actor’s second wife. Due to graduate in 2013, he’s a sophomore theater major at NU, where he says he likes to “chill” at the Pi Kappa Alpha frat house.

Before anyone goes tsk-tsk-ing him, however, remember that prior to maturing into one of America’s most respected and level-headed actors, Tom Hanks was introduced to the world by saving his own privates as a cross-dresser (“Bosom Buddies”) and a hard-core party animal (“Bachelor Party”). “I’m not my dad. I am my own person,” Chet Hanks claims, but maybe the rapper doesn’t fall that far from the Forrest, after all.

[Chicago Sun-Times]
Posted by Ben at 8:00 AM No comments:

As the earthquake of hype settles down, check out this interesting aftershock...

Found at Last: A Tape of the First Super Bowl
[WSJ]
Posted by Ben at 9:00 AM No comments: 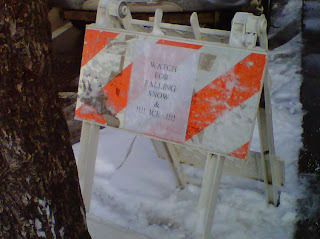 But if we watch for it, won't we get hit right in the face?
Posted by Ben at 8:00 AM No comments:

On the heels of Li Na's historic run to the finals of the Australian Open women's singles draw, in which the Chinese tennis pro became the first Asian player of either gender to reach the final round of a Grand Slam tennis tournament, comes this interesting item:

It recalls the week in 2010 when Andy Roddick's slide from #10 to #11 marked the first time in the history of the rankings in which no American man ranked in the Top 10.

Amid the ongoing emergence of talented young players of both genders with engaging personalities to match, the parity on the women's side is a positive step for the pro game and the sport in general. 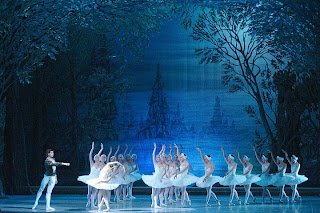 It's all about Black Swan these days, but with this much snow on the ground maybe we should think of this one as White Swan, or at least Frozen Lake.

In any event, the State Ballet Theater of Russia's acclaimed production of Swan Lake alights in Chicago for three shows this weekend, opening Friday evening and playing two shows on Saturday at the Auditorium Theatre.

(After that, I'm guessing the Russian ballerinas loosen their corsets, order in some ribs from Twin Anchors and hand-dipped sandwiches from Mr. Beef to their hotel, and enjoy their first Super Bowl.)

From the production's press release:

THE STATE BALLET THEATRE OF RUSSIA PRESENTS "SWAN LAKE"
AT THE AUDITORIUM THEATRE OF ROOSEVELT UNIVERSITY
FOR THREE PERFORMANCES ONLY FEBRUARY 4 – 5, 2011
CHICAGO - The State Ballet Theatre of Russia brings the world’s most beloved ballet, “Swan Lake,” to glorious life for one weekend only Friday, Feb. 4 at 7:30 p.m. and Saturday, Feb. 5 at 2 and 8 p.m. at the Auditorium Theatre of Roosevelt University, 50 E Congress Pkwy. Hailed by the New York Times as “full of enchantment,” this company of distinguished dancers has showcased the unparalleled art of Russian ballet to countries throughout the world. Tickets start at $30 and are available at ticketmaster.com/auditorium or by calling (800) 982-2787.
The classic “Swan Lake” has charmed audiences since its St. Petersburg premiere in 1895 and is considered the embodiment of Russian ballet. Set to Tchaikovsky’s magnificent score, with choreography by M. Petipa and L. Ivanov, the ballet tells the timeless story of a young prince named Siegfried who falls in love with Odette, a princess who takes human form at night but each morning is turned into a swan by the evil sorcerer Von Rothbart. In this consummate tale of love conquering all, the spell may only be broken if a prince pledges eternal fidelity to her.
The State Ballet Theatre of Russia is the touring company of The Voronezh State Opera and Ballet Theatre, which has origins in the 16th century and was re-founded in 1961. This company has toured with productions of traditional Russian classics throughout the world. With a company of 65 dancers, the theater’s repertoire includes work by both classical and modern Russian composers, including “Swan Lake,” “The Sleeping Beauty,” “Cinderella,” “The Nutcracker,” “Giselle,” “Don Quixote,” “Le Sylphide,” “Scheherazade,” “Gavalry Halt,” “The Stone Flower,” “1001 Nights,” “Carmen”-suite, “Cipollino,” “Doctor Aubolit,” “Francesca di Rimini” and “The Fountain of Bakhchisarai.” Its performances are relatively new to U.S. audiences, as the company first graced American stages in 2006. The Director of the Company is Honored Artist of Russia Igor Nepomnyashchy and the Artistic Director of the Ballet is Lyudmila Sycheva.
“Swan Lake” will be performed Friday, Feb. 4 at 7:30 p.m. and Saturday, Feb. 5 at 2 and 8 p.m. at the Auditorium Theatre. Tickets are $30 to $87 and are available at www.ticketmaster.com/auditorium, by calling (800) 982-2787 or in person at the Auditorium Theatre Box Office, 50 E. Congress Parkway, Chicago, IL.
This event is part of The Soviet Arts Experience (October 2010-January 2012), a Chicago-wide showcase of works created under (and in response to) the Politburo of the Soviet Union. Visit www.SovietArtsExperience.org for a full schedule of events.
“Swan Lake” is also part of the Auditorium Theatre’s 2010-2011 season subscription series.  For more information or to purchase a subscription or group tickets call (312) 431-2357 or visit www.auditoriumtheatre.org.
Posted by Ben at 2:00 PM No comments:

While Chicago unburies itself from snow, many of us are housebound until roads are cleared and trains resume normal operation.

If you're as sick of watching news coverage as I am, try your hand at this crossword puzzle I wrote last spring. I was learning how to construct puzzles and this was my third effort.

I made the blocks gray rather than black to save you some toner. You can also email me for an Across Lite version that you can solve on your computer screen.

OK, crossword fans, have at it: 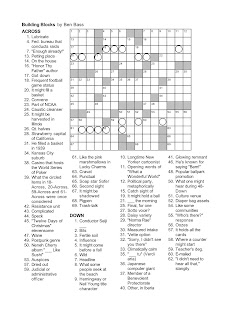 I love it when the Wall Street Journal keeps it real.