Day 16: Beware the Ides of March

I can’t remember ever feeling this confident about six answers and getting only three of them correct.

1. What name is shared by one of the three Biblical magi, a servant of the Montague household in Romeo and Juliet, and a size of wine bottle equivalent to sixteen standard bottles?

I knew that a Magnum and a Balthazar were large bottles of wine. Felt fairly confident that none of the three wise men drove a Ferrari in Hawaii. Recognized Balthazar as a magus name along with Melchior. Felt pretty sure I remembered a Balthazar from Romeo and Juliet. Thus, fairly straightforward. Can we just go with this question and call it a day?

2. 'Bewitched, Bothered and Bewildered' and 'I Could Write a Book' are standards which were written for what Rodgers and Hart Broadway musical, which starred Gene Kelly in the title role in the 1940 premiere and Harold Lang in the even more successful 1952 revival?

Here is a three-act play:


ACT I
(February 27)
“Well, I choked on a lifestyle question that one time,
but at least I still have a perfect record on math and theater questions.”
ACT II
(February 28)
“Name a part of a circle that is like a radius but not exactly
and also like a chord but not exactly.”
ACT III
(today)
This question.
Hmm. A mid-century Broadway musical I know nothing about with a signature tune I have heard a thousand times? With a title role that is obviously the male lead? I thought about it for a while until I came up with what I thought was a pretty bulletproof guess: The Most Happy Fella. But I was a most unhappy fella when I learned the answer was Pal Joey. They couldn’t have mentioned Frank Sinatra?

3. What has been dubbed as the most famous dream sequence in television history is the entire eighth season of what long-running television drama?

Easy as Eazy-E eating Easy Cheese while filling out his 1040-EZ. I gave this question the 0 because many players in the league will presumably know that an entire season of Dallas was explained away as a dream in order to reverse the prior bad decision to kill off the popular character Bobby Ewing. A flamboyant college roommate of mine who was deeply into the Dallas spinoff Knots Landing — and later came out to the surprise of no one — took great delight in the fact that the dream season impacted Knots plots and was always treated as reality in that show.

4. Aldrich Ames and Robert Hanssen are among a relatively small number of American citizens currently serving time in federal prison for what crime?

Ugh with a capital ugh. I knew these were both traitorous American spies who turned national secrets over to our enemies. So I said treason. Actual answer: spying/espionage. That’s like convicting a murderer not of murder but of being the guy who pulled the trigger.

I know, I know, that doesn’t exactly hold water. I’m just bitter. If it had occurred to me to say espionage I’d be fine with it. It’s not as bad as the Choral Symphony question. But if you share my disgust, vent your spleen in the comments. Maybe I’ll feel better.

5. What is the name for the linguistic device which is a word, or occasionally a grouping of words, whose sound imitates the sound the word is describing, such as bang, click, fizz, and hush? 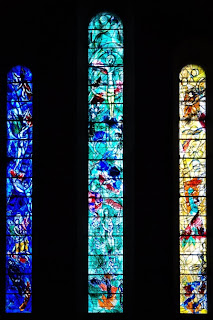 6. This is the work of what artist?

I knew Louis Comfort Tiffany was the king of glass art in his day, as I once wrote about for Flavorpill Chicago. Didn’t know whether he’d done any religious work, but it felt like a solid guess. Unfortunately, the correct answer was the univocalic Marc Chagall. I gave this one the 3 because my opponent was iffy in art.

No Chicagoan has left this many tallies off a scoreboard since Arnold Rothstein fixed the 1919 World Series. Help me, opponent!
Posted by Ben at 12:05 AM

I had the same feeling: I thought I was finally going to get my first six-pack of the season, and I ended up with 4. I too was among the many, many people who said "treason", and I too thought Tiffany seemed like a really solid guess. Sigh.

1. I must have spent ten minutes trying to think of this, and finally "Bartholomeo" popped into my head. I was never going to get Balthazar, so it was just as well.

2. Never had a shot, I put down On the Town as a desperation pass.

4. I don't agree with you about this, this is an entirely legitimate Q/A. I spent several minutes going back and forth between treason and espionage, and went the wrong way too. In retrospect, espionage is a much better guess. If those guys had been convicted of treason, we'd sure as hell know it, plus it's a capital crime. I was betting that there was some lesser charge of treason, and apparently there isn't, or at least it didn't get invoked here.

5. The funny thing about this is, not only did I know it, but every single person in my rundle but 1 got it right -- I am pleased, after a fashion, that it's so well known, but not pleased insofar as my incorrect assessment resulted in a faulty defense that resulted in a tie (I scored it a 2). Pbbbbt.

Interesting also to note that almost all of the top 8 players in my rundle got questions 4 and 6 wrong. The red stripes on the top of the chart are just curious. Probably they all guessed treason, and I don't know why Chagall was more obscure to them than the people who've done worse up till now.

I entered my first five answers so quickly that when I encountered Q6, I thought that it was unfair to give me such hope of a sixpack. But then I only got three right, so!