Although the primary purpose of baseball spring training is to get players warmed up for the season and audition minor league prospects for roster spots — and maybe make a few bucks along the way — a nice side benefit is the many former players who also come around.

From Yogi Berra working with young prospects at Yankees camp in Tampa to Willie Mays greeting fans at Don & Charlie's restaurant in Scottsdale, there's a baseball legend everywhere you go.

And so it was that I happened upon one of them today during the Giants-White Sox game at Scottsdale Stadium, one of my all-time favorite players to boot: 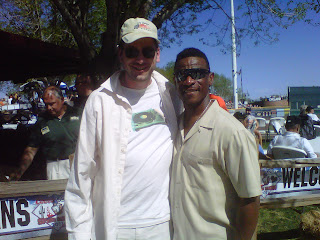 Recognize him? The greatest leadoff man of all time?

Once aboard he'd run on you all day, and even though you knew he was going to, there wasn't much you could do about it. The "Man of Steal" swiped 100 bases in his first full major league season and a ridiculous 130 bases two years later, more than nine entire teams that year. He led the big leagues in steals for 12 years in a row except for one injury-shortened season and ended up with 1406 stolen bases, not only an all-time record but 50% more than the guy in second place.

Add it all up and he scored more runs than anyone else, breaking Ty Cobb's record en route to a remarkable 2295 runs scored, another all-time record.

So who is this guy? Why, it's Marvell Wynne. Just kidding. It's the great Rickey Henderson.

As dynamic and exciting as Rickey was on the field, he was equally entertaining off it. Not unlike the aforementioned Mr. Berra, he was a true character who generated reams of copy for sportswriters with the offbeat things he would do and say.

In fact, some people were disappointed last summer by his Hall of Fame induction speech. It was straightforward, humble and sincere, a perfectly acceptable and respectable oration, but somehow not exactly Rickeyish.

Rickey was a first-ballot Hall of Fame shoo-in who received 94.7% of the vote. As I wrote at the time, "Excuse me? Who didn't vote for Rickey? That's like not voting for jelly in the 'what else should I put in my peanut butter sandwich?' vote."

The only explanation for leaving Rickey Henderson off a Hall of Fame ballot is that he was a bit of a showboat on the field, considered by some people to be cocky or conceited. A handful of baseball writers, though surely well aware of his Hall of Fame credentials, presumably left him off his first of a potential 15 Hall of Fame ballots to put him in his place, just as they punished Roberto Alomar for spitting in the face of an umpire. Alomar got in a year later on his second ballot.

I told Rickey that I enjoyed his Hall of Fame speech and asked how anyone could leave him off a Hall of Fame ballot.

He smiled and replied with a characteristic gem: "I guess those guys never saw me play."

How do we know that's YOU next to the great Rickey Henderson? (wink)

A sportswriter buddy of mine (who cast a Hall of Fame vote for Rickey, by the way) points out that in the spirit of this blog, the photo should be captioned "Greatest leadoff man of all time and Rickey Henderson."

Did he think you were a former teammate like his famous John Olerud story?
Olerud wore a batting helmet in the field. Supposedly Rickey goes up to him in spring training one year and says hi and that he once played with a guy who wore his helmet like that. Olerud reminded him that he was the guy and that they had played together on a different team a few years earlier.

I told my friends that story at the game the other day. I think Rickey denies it along with the old chestnut about his paycheck. Apparently when he was a newly minted major leaguer, his team had a discrepancy in their payroll account. The cause was determined to be that Rickey had framed his first paycheck and hung it on a wall.