When you solve the KenKen or the crossword puzzle in your New York Times Magazine, do you ever wonder who else is working on it at the same time?

One such person, it turns out, is Martha Stewart. She's an enthusiastic solver who works on the NYT puzzles every day while being driven to work, occasionally getting so engrossed that she falls a bit behind in her job duties. 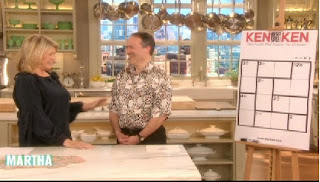 She said as much to New York Times puzzle editor and FOBB&B Will Shortz while talking about KenKens and crosswords during a recent puzzle-themed edition of "The Martha Stewart Show." The episode also looked at mechanical puzzles, a dot-to-dot puzzle, memory improvement, and jigsaw puzzle creation.

Click here to watch the episode in its entirety.
Posted by Ben at 10:00 PM