"It wasn't until I saw Rickey that I understood what baseball was about. Rickey Henderson is a run, man. That's it. When you see Rickey Henderson, I don't care when, the score's already 1-0. If he's with you, that's great. If he's not, you won't like it."
—Oakland Athletics teammate Mitchell Page 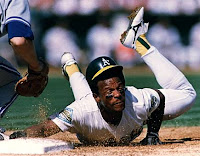 "I did a lot of study and I found that it's impossible to throw Rickey Henderson out. I started using stopwatches and everything. I found it was impossible to throw some other guys out also. They can go from first to second in 2.9 seconds, and no pitcher-catcher combination in baseball could throw from here to there to tag second in 2.9 seconds, it was always 3, 3.1, 3.2. So actually, the runner that can make the continuous, regular move like Rickey's can't be thrown out and he's proven it."
—Baseball scout Charlie Metro

Ed.: Nicknamed "the Man of Steal," Henderson is baseball's all-time stolen base king. His 1406 career steals are 50% more than the 938 of the all-time runner-up, Lou Brock. Henderson led the American League in steals 13 times, including every year from 1980 to 1991 except his injury-shortened 1987 season. He stole 100 bases in 1980, his first full big-league season, and an unbelievable 130 bases in 1982. There were nine entire teams that stole fewer than 130 bases that year.

"Just because I believed in what I was doing on the field, and dedicated myself to playing the game, does that mean I'm cocky? Does that mean I'm arrogant? People who played against me called me cocky, but my teammates didn't. I brought attention, fear. I wanted to beat you in the worst way. If that made me cocky, so be it."
—Henderson, on his reputation

"Which one of you bad boys got some hits in you?"
—Henderson, to his bats

"I hit it out, but it didn't go out."
—Henderson, on why he broke into a home run trot on a long fly ball that bounced off the outfield wall in a 2001 game; he ended up on first base

"Scoring the most runs in major league history. You have to score to win."
—Henderson, on his greatest accomplishment

Ed.: He's right. Although the runs-scored statistic gets less attention than the home run (any given run scored being less dramatic and telegenic than any given home run), and lacks the home run's cultural resonance, in pure baseball terms it is more crucial to the success of a player's team and therefore more important.

The home run is one-dimensional, a function of a player's power, not his overall game. There is only one way to hit a HR, and it in turn is only one way to score a run. There are, however, numerous ways to score runs, each of which helps win a game, and Henderson excelled at all of them (and could also hit home runs). He averaged over 100 runs scored per year for his entire career.

Scoring more runs than anyone else in baseball history is a rare feat, made possible by the varied aspects of Henderson's greatness: his iconic base-stealing; his 2190 career walks, which eclipsed Babe Ruth's all-time record (since passed by Barry Bonds); his 3000+ hits, in themselves a ticket to the Hall of Fame; his career .401 on-base percentage; his power at the plate with 297 home runs, good for a spot in the all-time top 100 at the time he stopped playing, and a record 81 HR to lead off a game; and his longevity and fitness, with 3081 games played (fourth all-time). He also drove in 1115 runs himself, remarkable for a career leadoff hitter.

Henderson broke Ty Cobb's career mark en route to the all-time record of 2295 runs scored. Bonds, third all-time with 2227, could surpass Henderson in 2008. Babe Ruth and Henry Aaron, the last two players Bonds passed on the career home run ladder, are tied for fourth at 2174 runs scored. With 1501 runs already scored at age 32, Alex Rodríguez could have the last word among today's players.

With all that said, "Baseball isn't statistics, it's Joe DiMaggio rounding second base."
—Jimmy Breslin

The last word on a diamond gem: "Without exaggerating one inch, you could find fifty Hall of Famers who, all taken together, don't own as many records, and as many important records, as Rickey Henderson." Is Henderson a Hall of Famer? "If you could split him in two, you'd have two Hall of Famers."
—Baseball statistician Bill James
Posted by Ben at 9:46 PM

Great post! Brings to mind a great bar conversation: Would you rather be Rickey or [fill in the blank with other HOFers]?

Generally, my answer to that would have to be Rickey. He constantly got on base, ran like the wind, and stressed out every opposing pitcher and manager. He affected games he was in more than pretty much anyone. Who wouldn't want to be that guy? Other HOFers I like include Tony Gwynn, Eddie Murray, Roberto Clemente, Lou Gehrig, Greg Maddux, Cy Young and Ernie Banks. Bert Blyleven deserves a spot there too.

I grew up watching Rickey Henderson. His lead-off homers, taken-for-granted stolen bases, runs runs runs, these were some of the only good things about the Yankees back then. The others were Mattingly, Winfield, and Guidry. Henderson was absolutely riveting, bringing the game back up to its mythical/hero level every time he approached the plate. Who could they induct over him; Steve Cone? Please.