The Sound of Young America

...is a coolly named NPR show "about things that are awesome," heard in various cities other than this one. With a curious host, hip guests in the creative arts (think WFMU), and a laid-back vibe, it's Fresh Air for the Facebook generation. Chicagoans can catch it via podcast.

The main feature was an interview with iconoclastic recording engineer Steve Albini, knob-twiddler to rock groups like Nirvana, Pixies, PJ Harvey, Breeders, Page & Plant, Jesus Lizard, Low, and Cheap Trick. His strong opinions and ascetic sensibility are familiar to anyone who's followed his running commentary on the music industry over the past twenty years. A longtime lightning rod on the local and national music scenes, Albini also provided grist for countless barroom debates by engaging in 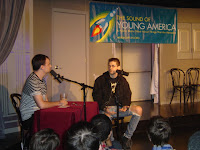 highly public squabbles with the likes of former Chicago Reader music critic Bill Wyman (no, not that Bill Wyman).

Albini's aesthetic is founded on an appealing modesty about the role of the recording engineer. As he recently posted in an online forum: "I don't really think the recording is that important to a great record. Great records would be great under almost any circumstances. Mediocre records that might otherwise have been unlistenable, well, yeah, I guess it matters then. An excellent recording can make a crappy record into one that is merely unremarkable. What kind of accomplishment is that?"

Albini is widely admired for his egalitarian ethic. Where many people, having midwifed the likes of Nirvana's In Utero, would coast on their big name and roster of famous clients, working infrequently and charging dearly, Albini chooses to make records nonstop for an affordable $650 day rate. As a result, he's engineered literally thousands of records for generally obscure bands, all of whom appreciate it.

In his interview, Albini was thought-provoking and funny, less acerbic than the rep that precedes him but thrilled at the death rattle of the sclerotic music industry he's long disdained. He may have mellowed just a little as he enters his dotage, but there's still fire underneath the placid surface. 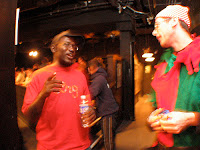 Did I attend the event dressed as an elf? I did. Imagine my surprise to learn that it also happened to be Halloween.

Memo to WBEZ's Torey Malatia: How about adding The Sound of Young America to your lineup?
Posted by Ben at 2:32 PM

Torey is only interested in shows that prop up his ego or his status with the board of directors. The only other cirteria is whether or not he can take creative credit regardless of how little creative input he actually has.