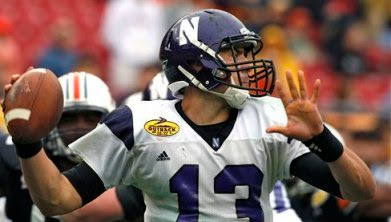 Close but not quite for my alma mater Northwestern Wildcats football team, who fell just short in a bid for their first bowl win since the 1949 Rose Bowl. They lost the Outback Bowl in overtime, 38-35.

NU fell to 1-7 lifetime in bowl appearances. On the plus side, they've made it to seven bowl games since roaring back to relevance with a surprise trip to the 1996 Rose Bowl (I was there, it really happened).

In Tampa for their first-ever meeting with Auburn, the 'Cats sowed the seeds for their own demise with 5 interceptions by usually steady QB Mike Kafka, who'd thrown just 7 INTs all year. Not all were his fault, but he did try to force a few plays. Two Kafka passes were picked off in the end zone and one was run back 100 yards for a score. He also had his string of completions without an interception snapped at 116.

Then again, with little running game this year, the 'Cats got to the postseason on the strength of Kafka's right arm. He lost the starting QB job a few years ago but got it back for his senior year, playing so well that he's now projected as an NFL draft pick. He threw 4 TDs in this game and rushed for another.

NU's special teams struggled too, as P/K Stefan Demos missed two FGs and a PAT and had a lousy day punting. He was also knocked out of the game in overtime when he was needed the most.

Running a no-huddle attack, NU ran over 100 plays and set all kinds of school and Outback Bowl records for offense. Kafka's 47 completions, 78 attempts and career-high 532 yards were all school records. He needed only three quarters to shatter Drew Brees' Outback Bowl passing record.

To its credit, Northwestern never gave up, forcing 4 fumbles to stay within reach. Graduating (and NFL-bound) defensive back Sherrick McManis played his usual ultra-athletic game, chipping in a key takeaway. He'll be hard to replace.

The 'Cats erased a 14-point in the last five minutes of regulation, converting several do-or-die fourth downs to even the score. They even got the ball back after tying the game with about a minute left when they stripped the ball from Auburn's return man on the ensuing kickoff. But Demos barely missed a would-be game-winning FG with 0:03 left and time ran out with the score tied.

The overtime was wacky, with a series of penalties and video reversals giving Northwestern the nine lives their nickname implies. Auburn's sideline rushed onto the field on two occasions thinking the game was over, but both times it turned out not to be. On the final play, with their only experienced kicker injured, NU ran a fake field goal but Auburn was not fooled and NU fell two yards short of the end zone.

Ultimately this season ended just as the previous one did, with an overtime loss in a bowl game. Still, playing in a competitive Big Ten, NU fought its way to an impressive 8-win season punctuated by several dramatic comebacks (including from down 23 points) and a road victory over an undefeated Iowa team ranked in the NCAA's top 5.

NU's energetic young coach Pat Fitzgerald is newly inked to a long-term contract and only figures to attract better and better recruits with 17 wins in the last two seasons and an ongoing series of bowl appearances. Plus, unlike what you'll find at a number of traditional football powers, our players can read.

Congratulations to NU on another entertaining and successful football season.

p.s. Did I mention Northwestern's basketball team is ranked in the AP Top 25 for the first time since 1969?
Posted by Ben at 5:00 PM