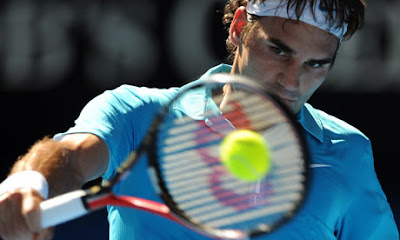 One of my favorite annual sporting events, the Australian Open, is underway.

It's timely that vampires are huge right now, since you sort of have to be one to watch it live from the United States. There's a ton of live coverage, but a lot of it takes place on ESPN2 between midnight and 6 a.m.

Still, there are windows. Chicago, for example, is 17 hours behind Melbourne, so night session matches that run late can be seen live here first thing in the morning as you're getting ready for work. It's a lot like Wimbledon used to be, when HBO would cablecast the day session live from SW19 and I'd watch an "afternoon" match at 7 a.m. while eating my cereal in Bucktown.

Also, you can get home from work and watch the "next" afternoon's matches live on the Tennis Channel. It's a look into the future. (The future, Conan?)

The miraculous Internet age has brought another way to keep up with the action Down Under: a wondrous product called ESPN360.com brings you live and recorded coverage of all six television courts. It's a beautiful way to bounce from match to match, and even see what network programmers refuse to show you (it rhymes with "shmoubles"). Assuming your workplace doesn't block it, you can catch up right on your office PC. If tennis were more popular, the wealth of coverage would destroy American productivity as surely as online March Madness games do.

The Australian Open bills itself as "the Grand Slam of Asia/Pacific," and indeed it alone among the four major tournaments represents the antipodes (the other three are Wimbledon, the French Open and the U.S. Open). It also stands alone on the calendar, as Australia enjoys summer while the Americans and Euros shiver.

More broadly, it's just a good time. The "Happy Slam" takes place in the friendliest country on earth, and its throngs of boisterous international fans make it a nonstop party. I was lucky enough to attend a few years ago and particularly remember a night match in Rod Laver Arena between the Swede Joachim Johansson (or was it his countryman Thomas?) and Aussie native Mark Philippoussis. It was like a Davis Cup tie, or maybe a World Cup soccer match: people chanting, people singing, beer everywhere, Swedish flags, Australian flags. There were more Viking helmets than you'd find at the Sydney Opera House. I think there was also a tennis match.

My favorite guy, Roger Federer, as usual the most interesting story in tennis, is back at it this year with a record 15 major titles in his pocket and looking for more. There he is above in his first-round match, giving me another free lesson in maintaining a proper backhand grip and taking the ball out in front. Thanks, Rog.

Federer at the Australian Open is always fascinating. Kicking off the tennis year, the tourney reminds casual fans that the sport goes on, and Fed excels on the hard courts. He's lost some epic five-setters there, to Novak Djokovic in the semis a few years ago and Nadal in last year's final. But he's won the trophy a few times too and he's entertaining as hell either way. Plus I was there the first time he won it, in 2004, and he hit #1 for the first time during that fortnight, so I feel a kinship.

As he has been the past few years, Federer is a walking Rorschach test. Some say he's done contending for major tournaments, and indeed there's evidence for that theory. He's shown cracks against players he used to destroy (in what world does he lose in the U.S. Open final to Juan Martín del Potro?) and with newborn twins in his house, some think he's getting ready to move on.

Giving further credence to his doubters, Federer just dropped an opening-round set for the first time in his past 25 Grand Slam tournaments. The first three sets against Igor Andreev were often uncomfortably close before Federer hit the gas and bageled the hard-hitting Russian in the fourth set. (If only I'd been able to stay awake I might have enjoyed it.) Andreev had given Federer trouble before, taking him to a fifth set in the 2008 U.S. Open round of 16 before the princely Swiss dispatched him en route to his fifth straight title at Flushing Meadows.

Then again Federer's loyalists, and I am one, point out that he not only won two majors in 2009, including his first French Open, but was two sets away from the clean sweep. He took Rafael Nadal to five sets in last year's Australian Open final and did likewise to del Potro in New York. That doesn't sound like a guy ready for the retirement home.
He's also reached at least the semis in a record 22 consecutive Grand Slams, an astounding feat that has long since eclipsed Rod Laver and Ivan Lendl's impressive previous mark of 10.

It makes for a good story to doubt Federer and though there have been reasons (his several bad losses after a bout with pneumonia; Nadal's rise; his merely beating rather than crushing people) he has continued to come up with the goods. More to the point, he remains the most talented player of all time and has never backed off his long-professed commitment to play the sport at the highest level for years to come.

Watching Federer obliterate people with shots that literally no one had ever hit before (I'm specifically thinking of Wimbledon and the U.S. Open in around 2004-05) was electrifying and riveting. That the kids are inching closer to him every year only makes the saga interesting in a different way. Bring it on, Federer is saying, and has always said.

And we get to watch it unfold. Who really wins these matches? Us.
Posted by Ben at 8:00 AM

Donald Young, youngster from Chicago, against supposedly retiring from tennis this year or was it last Lleyton Hewitt.

James Blake a up and down player, more down lately takes on fired up Del Porto, a true test for Blake.

My Uncle will be happy, Maria Sharapova is out of the tourney in the 1st round, he cannot take her screams every shot.