You cannot be serious 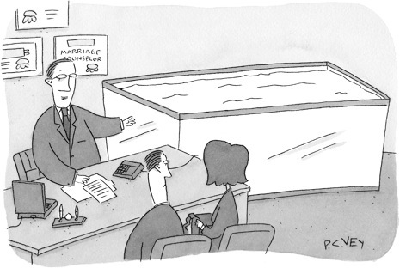 Speaking of the New Yorker, they've done it again.

My entry to this recent iteration of the magazine's Cartoon Caption Contest:

"The first step is to determine whether your wife is a witch."

The three entries chosen as finalists:
Naturally I lack perspective, but from where I sit, they blew it again. Like any reasonable person, I don't mind not getting the call if the finalists are at least as solid as my entry. In this case, just like last time (mine here, finalists here), I don't see it.

My election outrage doesn't approach that which I felt over, say, the 2000 U.S. presidential vote, but still. Bob Mankoff, are you listening?

Considering how much naches (Yiddish for "corn chips") I've gotten from the New Yorker in ten happy years as a subscriber, it's hard to get too upset over such a small thing—it barely graduates to blogworthiness, but hey, something's gotta fill all this white space—so rather than criticize a magazine I love so much, I'll just distill my thoughts down to the following: ?!

Indeed, although Radosh's enumerated criteria for a good anti-caption include the possibility that it "is not just not funny but aggressively unfunny," the fact is that many of the Radosh anti-captions are not only funny, but funnier than those in the New Yorker. They're also decidedly more entertaining, given a blog's greater latitude to achieve a surprising outrageousness.

Still, although the feisty Radosh may be ahead of the stately New Yorker (founded Feb. 1925) on the hipness front, winning or even finalisting the NYer C.C.C. would be a thrill. (The Grammys have been stilted and irrelevant for decades but most musicians would like to win one, and the New Yorker is neither stilted nor irrelevant. As Kellogg's says about their corn flakes, it's the original and best.)

And so I soldier on, despite the various obstacles to my winning: I'm usually several weeks behind in my New Yorker reading, so I only see the current contest when I intermittently remember to visit the magazine's website; even when I do, I sometimes draw a blank on the gag-writing front; and on the rare occasion that I come up with something pretty good, so far at least, it doesn't make it out of the slush pile.

Think you're funny? Enter the latest contest here.
Posted by Ben at 8:14 AM

competitions based on subjective judging are always going to lead to heartbreak. and comedy is a more fickle sense (and therefore more difficult to succeed in) than drama.

but perhaps we are wrong in assuming that the submissions are edited by people of true editorial caliber. given labor costs these days, and the imaginably high number of submissions, it could be anything from a random process, to an arbitrary standard like word count, to toddlers in a chinese sweatshop that decides the finalists. if we knew more about the judging, maybe we could write for THAT audience instead of the perceived one.

At a New Yorker Festival appearance last year, cartoon editor Bob Mankoff explained that a special software program sorts the thousands of submissions by category (in this case, those might include communication, swimming, divorce, time outs, adultery, drowning, etc.). Presumably this is intended to produce finalists with three different thematic angles.

Still, since any given category is likely to include a wide gamut of submissions (from witty to hacky, original to trite, inspired to pedestrian, and hilarious to meh), they pretty much have to be read and evaluated individually. The fear, of course, is that some are not.

In any case, once the submissions are sorted, Mankoff and co. sift through them and choose their finalists.

Sure, it's all completely subjective and a matter of taste, but a fair number of people have expressed frustration with the contest's track record.

I will stop short of suggesting, as one wag in the audience mumbled, that the software program seems designed to guarantee a steady mediocrity.

However, given that there pretty much have to be at least three funny submissions per week, I will say that the finalists have been disappointingly inconsistent.

Yours was super--too perfectly so for Radosh, unfortunately, or you could have send it to him. Maybe you'd get a shoutout, a la "This should have won the real contest."