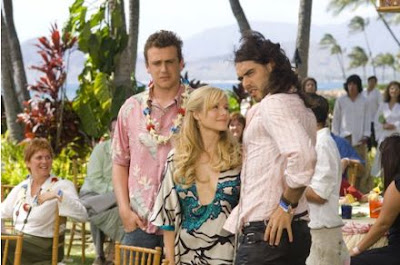 The great Judd Apatow's Hollywood comedy mill has cranked out another winner in the raunchy/sweet/truthful tradition of The 40-Year-Old Virgin, Knocked Up and Superbad.

I saw Forgetting Sarah Marshall at a preview screening, where the capacity audience roared throughout. It's bursting with funny lines and sight gags, some in lead actor Jason Segel's original script, others improvised by the likes of iO/Second City alums Jack McBrayer and Liz Cackowski and Apatow stablemates Paul Rudd and Jonah Hill.

British standup comedian Russell Brand shines as a priapic rock star; Mila Kunis and Kristen Bell are well cast and radiant as, respectively, a laid-back Hawaii hotel hostess and the titular devastating ex-girlfriend. The movie loses a little steam in the final act, but by then you've already gotten your money's worth.

The "world's first romantic disaster comedy," Forgetting Sarah Marshall opens tomorrow. Check it out.
Posted by Ben at 7:44 AM

Much funnier than I anticipated.

Darald: What's the state fish of Hawaii?
Dwayne the Bartender: The Humuhumunukunukuapua'a. Yeah, B----!

Peter Bretter: You're like one of those women from Flavor of Love.

Unrelated, is there anyway to keep the "Email follow-up comments to" option checked as default?