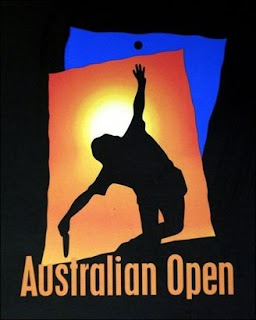 The 2011 Australian Open began "today" Down Under, though the first ball was struck over 24 hours ago since Melbourne, Victoria is 17 hours ahead of Chicago.

Having been lucky enough to attend the AUS Open a few years ago, I can attest that it lives up to its casual nickname, "the Happy Slam." Of the four major tennis tournaments, known as the Grand Slams, which I've attended a total of seven times — all but Roland Garros, which I'll hit as soon as I can get away from the office in May — the Australian is the most laid-back and fun-loving. It's a festive party atmosphere where a tennis tournament also happens to be going on.

In an inspiring example of the good vibes on the pro tennis tour, when Roger Federer heard about the recent flooding in Australian tennis legend Rod Laver's hometown of Rockhampton, Queensland, the princely Swiss called "the Rocket" and asked if there was anything he could do to help.

Laver replied from California that he wouldn't be able to make it down to Melbourne for this year's event, but encouraged Roger to get involved. In short order Federer rounded up Rafael Nadal, Andy Roddick, Kim Clijsters and a dozen or so other top pros to stage an exhibition in Melbourne Park the day before the tournament to raise money for flood victims.

It worked out to perfection. They sold out Rod Laver Arena at 20 bucks a ticket, thousands more fans packed the nearby Garden Square, corporate sponsors made matching donations, players pledged a share of their prize money and everyone from to John McEnroe to Lance Armstrong (in Australia for a bike race) wrote checks. All in all, Federer and co. raised two million Australian dollars in a few hours.

Plus the tennis was entertaining as hell. Since the players were there to put on a show rather than beat each other, they left their game faces at home and broke out all the shots we rarely see (and commentary we rarely hear; they wore wireless microphones).

It was all quite reminiscent of the similarly impromptu "Hit For Haiti"charity events that took place at last year's Australian Open and Indian Wells tournaments in the wake of the Haiti earthquake.

Speaking of which, check out these ridiculous back-to-back points from the Hit For Haiti at the 2010 Australian Open featuring Roger Federer and Lleyton Hewitt playing doubles against Andy Roddick and Rafael Nadal:

If you can spare a few American dollars to help Australian flood victims, click here to visit the Australian Red Cross.

And if you can take the next couple weeks off from work, the Australian Open will air live from Melbourne on ESPN2 for about 10 hours per weekday beginning at 8 p.m. Chicago time.
Posted by Ben at 10:00 PM

the second point was cute, but that first point is beyond absurd.

Loved that! Thanks, Ben.