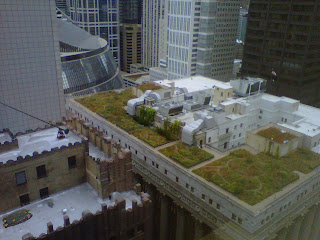 The mayoralty of Richard M. Daley, longest in the history of the City of Chicago, is about to end. He has been both beloved and bemoaned, often by the same people.

On the plus side, he took over and improved the Chicago Public Schools, established a theater district in the downtown Loop, built the showcase Millennium Park (however late or over budget), created bicycle lanes on major roads throughout the city, and beautified neighborhoods by planting flowers and cleaning up streets.

Then again, he turned a blind eye to systemic corruption within his own administration, silented dissent by coopting more or less the entire Chicago City Council, and consolidated power to rule by executive fiat. Most notably he tried to build a children's museum on dedicated open land in Grant Park and demolished the runway at the popular Meigs Field airport in the middle of the night.

The above photo is an apt distillation of the widespread binary feelings about Mayor Daley's reign. It's the forward-thinking rooftop garden atop City Hall, conceived as an experiment to test how green roofs affect temperature and air quality, featuring 20,000 plants of more than 150 species.

I think Mayor Daley's biggest negative legacy is the fiscal disaster he leaves, having sold off the Skyway and parking meter revenues and then already spending those funds.

I think you're right, particularly if it's true that he left over a billion dollars in parking meter revenue on the table.