I just woke up and turned on my SiriusXM satellite radio, which soon played a commercial for this weekend's NFL football playoffs.

I usually either skip the commercials altogether or tune them out, but this one got my attention when it started, "This Sunday at 1 p.m. Eastern..." because my hometown Chicago Bears are playing at noon Sunday. "A trip to the NFC championship game is on the line" (true) "when Matt Hasselbeck leads the Seattle Seahawks" (mhmm) "against Kyle Orton and the Chicago Bears."

Whaa? The Bears traded that guy for Jay Cutler two years ago. 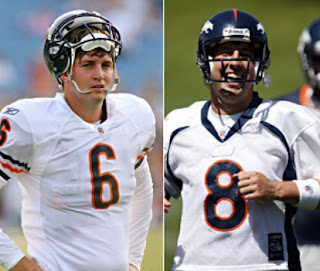 Bristol, Connecticut-based ESPN earns widespread derision for obsessing over and breathlessly hyping East Coast teams, particularly the New York Yankees, while overlooking the drama here in flyover country. This criticism is often justified. But they apparently also deserve credit for knowing which players are on which teams.

I know most of us who subscribe to satellite radio are paying for the Howard Stern show, not NASCAR or football or Oprah or Martha Stewart (all of which are considerably more interesting on television), but surely SiriusXM can pretend to care about the NFL.