And on keyboards, Bobby Sax 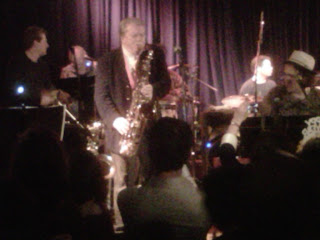 It was remarkable to hear the famous saxophone part from "Brown Sugar" performed by the guy who came up with it in the first place and played it on the record.

Mr. Keys was part of a small horn section that also included a trumpet player and a second saxophonist, longtime Chicago saxman Steve Eisen. Among countless other gigs, Steve played on "The Super Bowl Shuffle" by the Chicago Bears Shufflin' Crew. (Casual viewers of the music video might infer that running back Calvin Thomas was playing the sax, but it was actually Steve.)

During Tributosaurus' excellent rendition of "Waiting on a Friend," Bobby sat down and let Steve handle Sonny Rollins' familiar sax solo from the end of the song. It sounded great. 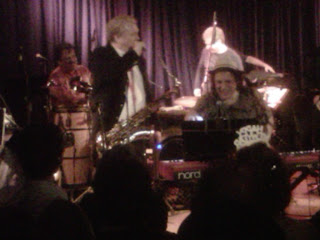 Between songs, Mr. Keys told a few stories about his experiences with the Stones. He explained that their musical relationship started about forty years ago when he ran into Mick and Keith, already acquaintances of his, in the hallway of a Los Angeles recording studio. He was there working on a different project and the Stones were laying down one of their reputation-making string of LPs during the several years around 1970 ("I think it was Sticky Fingers, no, wait, it was Let It Bleed"). They asked him to play on a song and he did, beginning a fruitful collaboration that continues to this day. In fact, they're making a record together this summer.

I had the chance to talk with Bobby after the show and came to realize what a rock and roll Zelig he is. I asked where he was from and he answered, "West Texas. Lubbock." I remarked that Buddy Holly came from Lubbock, and he replied that Buddy was a buddy of his: "The first time I ever played a sax into a microphone was in Buddy's garage around the block from my house."

I had to ask him about his good friend Keith Richards, from whom he has been inseparable for decades.  Their close bond was only strengthened when they discovered they share a birthdate. To this day they speak with each other several times a week.

As Bobby tells it, "When Keith found out we were born on the same day he said, 'You know what that means? We're half man and half horse. We can shit in the street wherever we want!' I don't know what that means but it sounds good." You can't make this stuff up.

As if that weren't enough, Bobby also lived next door to John Lennon in England and played on all his solo records, plus Beatles tracks like "Got To Get You Into My Life." Bobby's take on the smart Beatle? "He was a great man, John. A truly great man." I happen to agree, but he would know.

Bobby is a warm and friendly guy in his own right. Several times when he told me something surprising, such as that he grew up with Buddy Holly, I'd say "You're kidding," to which he'd yell back in his Texas twang, "Would I [expletive] kid you?!"

Fun review of the Tributosaurus Bobby Keys show. Saw them (and him too) at Fitzgerald's two Halloweens ago. They alway do a nice job, so I wasn't surprised by your reaction. Maybe not so well kept, but they're one of Chicago's little secrets! Thanks for reminding me of a fun show, Ben.