Beauty and the B

We were just walking through our London hotel lobby en route to breakfast when we encountered a group of identically dressed, radiantly beautiful, heavily made-up young women. I thought they looked like a high school cheerleading team.

Close, but actually they were the Tampa Bay Buccaneers cheerleaders, here to promote a game between the Bucs and the New England Patriots at Wembley Stadium in October. I couldn't believe they were pro cheerleaders because they were all so young-looking, not to mention short. (They were all about 5'1".) Apparently there are tall women on the full squad, but the advance team has a strict height requirement.

They're on a whirlwind tour of the U.K. Having just gotten off a plane from Florida, they're taking a nap, then heading to Scotland, then working their way back here for the weekend, furiously promoting all the while. They told us all about the game, then we wished them good luck and said goodbye. Five minutes later they were seated next to us at breakfast.

Despite their busy schedule, they insisted upon taking this photo so they could be immortalized on my blog. And now they are: 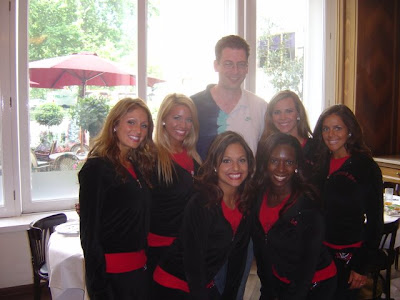