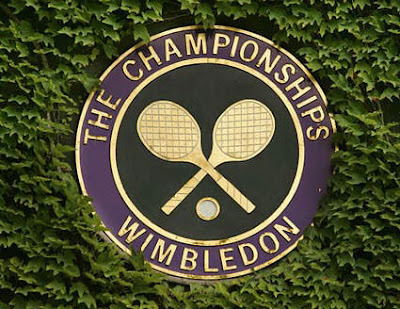 I'm heading to London shortly to attend the Championships at the All England Lawn Tennis Club, better known as the Wimbledon tennis tournament. We'll be there Thursday, Friday and Saturday for the men's semifinals and the women's semis and finals.

With five-time champion Venus Williams, two-time winner Serena Williams and big-serving Andy Roddick still in the hunt, an American or two ought to go deep. In fact, the Williams sisters squared off in the final last year. Meanwhile, Roger Federer is playing for history as he attempts to surpass Pete Sampras' record 14 major titles. On the men's side, that is; Steffi Graf won an eye-popping 22 singles Slams.

With NBC always on the lookout for an American angle, plus the women's final being played this year on July 4th, I'm dutifully bringing a U.S. flag and wearing a red, white and blue tie in a whorish attempt to get on television. Of course, TV silliness aside, it's a huge thrill and privilege to be going.

Incidentally, NBC will broadcast several hours of Wimbledon tennis every day this week, plus a nightly highlight show after late local news. Then they pour on the live coverage of the singles finals on Saturday and Sunday mornings, with maybe some "dubs" thrown in if the singles matches wrap up quickly enough. (There's not nearly enough doubles tennis on TV. It's high-octane stuff at the pro level and one of the best things about attending Grand Slam tournaments. But I digress.) Check local listings.

Not sure how much computer time or access I'll have, so I'll post photos and write here about the Big W either during or after the trip. Cheers, mates!
Posted by Ben at 5:00 PM

Have fun! Going to US Open in Sept. myself.

I suspect the best way to get media attention and all-around love over there would be to wear some Obamaphenalia.

Have a great time!