Yesterday I mentioned this blog to a longtime professional colleague who'd never seen it before. He emailed me last night and, after shrewdly stroking my ego by calling the blog terrific (I want whatever he's smoking), suggested that I explain Jim Rice's induction into the Hall of Fame in light of Andre Dawson's ongoing exclusion.
I'm not in the habit of taking requests, not because I'm above that sort of thing, but because people so rarely make them. Like my friend Trax and I used to observe in law school, it's easy to say you're not selling out when no one's bidding.

So thanks for checking out the blog, new reader. Here's my answer off the top of my head, just one person's opinion. 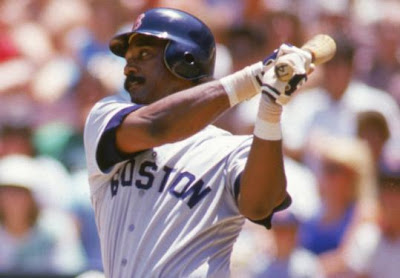 Jim Rice was a marginal case with one big pro, his plate work. As a, if not the, leading hitter of his era, he was as feared by pitchers as any batsman for eight or ten years.

Now for the cons. His career totals (.298, 382 HR, eight-time All-Star, one MVP), while impressive, were not overwhelming. He was not particularly fleet of foot and his defense was lightly regarded although he did have respectable career fielding statistics. He never won a Gold Glove, nor are there many Jim Rice catches or putouts on baseball highlight reels.

Rice was aloof and moody, rarely coöperating with the very baseball reporters who vote for the Hall. Plus, since he spent his entire sixteen-year career with the Boston Red Sox in the 1970s and 80s, he never won a title, though he came close in seven-game World Series in 1975 and 1986.

It's easy to make a Hall of Fame case for a five-tool player (hits for power, hits for average, runs, catches, throws) with big career numbers. Reaching a rare benchmark like 3000 hits, 500 homers or 300 wins is generally a ticket to the Hall, or was in the pre-steroid era. The baseball writers will look for a reason to vote for a popular player with solid numbers and a World Series ring or two, say a Kirby Puckett. It also helps to be a team leader who gives back to the community, a Roberto Clemente type (he was a Hall of Famer anyway), or have a singular distinction like Cal Ripken Jr.'s playing streak (I think he's overrated but I digress).
Jim Rice, however, was a surly guy who hit the cover off the ball on a bunch of teams that never won anything. His case for the Hall was less than overpowering and many of the baseball writers he alienated didn't care to reward him with a trip to Cooperstown.

He was mildly reminiscent of Ted Williams, an even better hitter who also patrolled the outfield in Fenway Park and had a difficult relationship with the press. His disdain for reporters, and their resulting disdain for him, cost him the 1947 MVP award. Williams won the American League Triple Crown that year, but one reporter left Williams off his ballot altogether and the MVP went to Joe DiMaggio by a single point. Even being named ninth on that ballot would have gotten Williams the honor, and tenth place would have tied DiMag.

It took Jim Rice all fifteen years of eligibility to get voted into the Hall of Fame. He came to look better over time, as have other pre-steroid stars, and his cause was probably helped as a wave of younger voters who'd grown up idolizing him gradually supplanted the older voters he'd snubbed for a postgame quote.
On a related note, the other day I wondered here why a handful of reporters didn't vote for Hall of Fame shoo-in Rickey Henderson in his first year on the ballot. Rickey broke Ty Cobb's all-time record for runs scored and Babe Ruth's record for career walks. He's not only the all-time stolen base king, he has 50% more steals than the guy in second place, Lou Brock. You could make a reasonable argument that he is among the five best players of all time.
As for his Hall vote, my query was facetious. The only explanation for leaving Rickey Henderson off a Hall of Fame ballot is that he was a showboat, seen by some as arrogant and self-centered. Players like that lose votes they deserve when emotion trumps common sense. "I'll show him," think some voters. Maybe they figure he'll get in anyway but they'll keep it from being unanimous. Or they might snub him for a year to put him in his place, then vote for him the next year if he doesn't get in the first time. 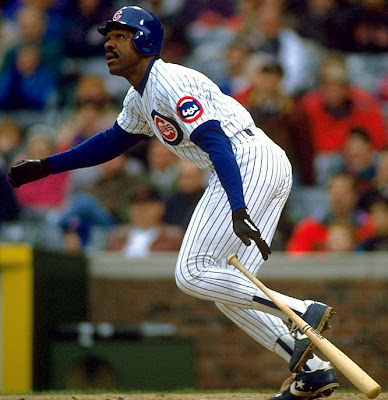 Moving on to Andre Dawson. Like Rice, he was an eight-time All-Star whose career numbers, though solid, are lukewarm by Hall standards (.279, 2774 hits, 438 HR, 1591 RBI). But his numbers look better in light of the fact that his knees were ruined by the artificial turf in his early years in Montreal.
As does his defense. "The Hawk" could run down balls with the best of them and gun down baserunners from three hundred feet away. Dawson won eight Gold Gloves and his cannon arm was widely respected around the league.
So was his bat. I still remember the day he was intentionally walked five times in one game. Yes, I just said Andre Dawson was intentionally walked five times in one game. That sounds like a Hall of Famer to me.
Dawson won the MVP for the 1987 Cubs, the first time a player on a last-place club won a Most Valuable Player award. He'd have gotten more attention had he not won the Rookie of the Year award and torn up the National League for eleven years in the baseball backwater of Montreal. (People talk about Don Mattingly as a Hall of Famer? Whatever. He was a good player on the Yankees. Andre Dawson was an exceptional player not on the Yankees.)
Like Rice, he never won a ring, but come on, the guy played for the Cubs, Expos, Red Sox and expansion-era Marlins. You wouldn't have either.
Off the field, Dawson was deeply admired as a serious-minded star who quietly led by example. He was a clubhouse leader and hard worker who did it the right way, a credit to the game.
To me, Andre Dawson is a Hall of Famer. If Jim Rice is one, even more so. Dawson was as elite a hitter in his time as Rice was, and unlike Rice, as excellent in the field as he was at the plate. Also unlike Rice, he combined speed and power. Dawson is one of only three players with 400 HR and 300 stolen bases. The other two are Willie Mays and Barry Bonds. Sound like a Hall of Famer yet?
Andre Dawson played hurt throughout his career with nary a peep of complaint or self-pity. He was a five-tool guy who hit the tar out of the ball and could beat you a bunch of different ways. Any team owner would want that guy. Put him in Cooperstown.
Posted by Ben at 7:00 PM

Nice work, Ben. I didn't know about that reporter in 1947. Great stuff.

Great post, Ben. I must also alert you to a player who has been truly snubbed: Bert Blyleven. See http://baseballanalysts.com/archives/2005/12/the_hall_of_fam.php. I'd like to hear your take on him at some point.

Totally agree about Blyleven and have urged my pal Teddy Greenstein, who has a Hall vote, to support him.

My parents met Andre many years ago when they were looking at homes in Florida (house was *way* out of their range). My Mom is a big Cubs fan and my parents chatted with him a bit. When asked what was the worst thing about being famous, Andre answered that men would try to look at his penis while he urinated. Ha ha!

I ran into Andre at a Bulls game at the old Chicago Stadium one winter while I was in high school. He lived in Florida in the offseason but he was in town appearing for Chevrolet at the Chicago Auto Show.

In my youthful enthusiasm I wanted an autograph but didn't have a pen, so I asked him if he had one. He replied with a quiet smile, "You'll never catch me carrying a pen."

Jackpot, how about this one:

"November 3, 1942: Ted Williams is the Major League Triple Crown winner, but amazingly, the writers select Yankees second baseman Joe Gordon by 21 votes as AL MVP. Gordon led the American League in three dubious categories — strikeouts (95), most double plays hit into (22), and the most errors at his position (28)."

Don Mattingly wasn't a good player, he was a great one; for five years, he was the best hitter in the AL, probably the majors. Oh, and one of the 5 best fielders at his position, ever.

Great blog, Andre does deserve to be in the Hall. I write the Andre Dawson for the Hall of Fame blog. Come by for a visit,