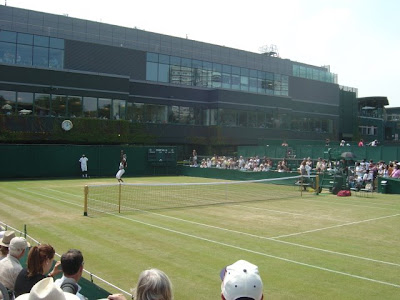 That's what I learned on the practice courts at Wimbledon yesterday. His daughter Venus was on a practice court warming up for her singles semifinal against world #1 Dinara Safina as I entered the hallowed grounds. Sister Serena was up first on Centre Court against Beijing Olympic gold medalist Elena Dementieva, so Venus was having a little hit before her match.
Venus' practice session was a family affair, with mom Oracene Price, dad Richard and his new young wife all on court as Venus coolly clocked serve after serve into the same square inch past David Witt, her blond surfer-dude-looking hitting partner. (See above photo, with Venus serving, Dad supervising and Centre Court looming in the background.) It was apparent that Venus would only be in danger if Good Safina showed up, not Emotionally Fragile, Ball-Spraying Safina. Apparently it was the latter because Venus won easily in a laugher. I didn't pick up a racket and Safina only won one more game than I did.
As for the Oreos, Mr. Williams apparently hadn't had much to eat because he was asking the family in front of me whether they had any more Oreos. No they didn't. But with a couple hundred million pounds to the family name, I'm sure he was able to manage a bite. Actually I felt bad for the guy because he was hobbling around so badly.
Anyway, his daughters both won, Serena despite hitting a net cord en route to winning a match point against, and Venus cruising. The tennis has been great here. I actually spent significant time on Courts 1 and 2 seeing some of my favorite doubles players: Leander Paes, the Bryan brothers (identical twins from California and world #1 team), and the clown prince of tennis, Iranian Mansour Bahrami.
Time to catch a bus. Cheers mates!
Posted by Ben at 1:55 PM

I'd imagine Richard Williams is a double stuff kind of guy