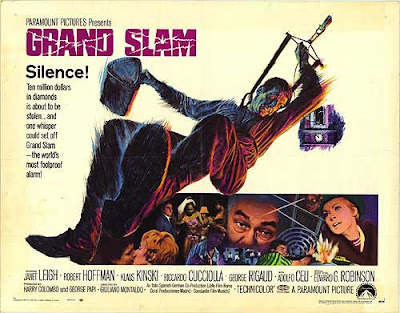 The other day was all about Mark Buehrle's perfect game, but today the grand slam takes center stage.

Last night, Josh Willingham of the Washington Nationals hit two grand slams in one game, becoming just the 13th major league player to pull off that remarkable feat. As rare as a perfect game is, Buehrle was the 18th man to throw one, so the Slam-Slam Club is even more exclusive.

These exceedingly rare baseball moments (rare? twice in one week is rare?) are inevitably surrounded by cool trivia. For example, of the thirteen players who've hit two grand slams in a game, only Bill Mueller hit one from each side of the plate. Fernando Tatis, meanwhile, pulled off something even more stunning: two grand slams in the same inning.

Willingham's two 4-RBI HRs came on a big day for grand slams, and home runs in general. Alfonso Soriano hit a grand slam in the bottom of the 13th inning to win the Cubs game. Fernando "just reminding you of my two grand slams in one inning" Tatis had a pinch-hit grand slam for the Mets.

Elsewhere around the league (since I'm regurgitating facts at such length now, I must acknowledge ESPN Stats and Information as my source), it was also a homer-happy day. The Angels hit back-to-back-to-back home runs. The Yankees went back-to-back. So did the Indians. Both Lees, Carlos and Derrek, homered in the Cubs-Astros game. As if in tribute to Sunday's Hall of Fame enshrinement of Rickey Henderson, Curtis Granderson went deep to lead off the Tigers game. In fact, the Giants-Pirates contest was the only game without a home run.

If you like home run trivia, as I do, check out this paean I wrote to historic homers.

p.s. Speaking of Buehrle, today was his first start since his perfect game last Thursday. It was shades of Johnny Vander Meer, the "Dutch Master" who threw two consecutive no-hitters in 1938. Buehrle was perfect through 5 2/3 innings tonight at Minnesota before missing the strike zone on a 3-2 pitch to Alexi Casilla. The base on balls ended Buehrle's bid for a second straight perfect game, whereupon the classy Metrodome crowd stood and cheered. The next batter, Denard Span, singled to break up the no-hitter.

Entering the game, Buehrle's teammate Bobby Jenks shared the all-time major league record for consecutive batters retired, with 41 (San Francisco's Jim Barr also retired 41 straight in 1972). Buehrle got his last batter out in a July 18 win before the perfect game, so he had 28 straight this morning, then sat down the first 17 Twins he faced tonight to set a new all-time record with 45 straight batters retired. My word, that is a lot of consecutive professional hitters to prevent from reaching first base.

Jenks watched with a smile on his face as Buehrle gradually tied his record, then eclipsed it when their former teammate Joe Crede grounded out for the second out in the fifth inning. From there, Buehrle set a new major league record with every batter he dispatched. He managed three more after Crede before walking Casilla to end the streak. Adding insult to injury, Buehrle was roughed up for four runs in the seventh and took the loss in a 5-3 defeat.

I, meanwhile, ate some Reese's Pieces, watched some World Series of Poker on ESPN, and blogged about grand slams and perfect games, so I'm also pretty amazing.
Posted by Ben at 10:40 PM

how many consecutive reese's pieces did you eat?

I would say somewhere between Jenks and Buehrle.

The specific exalted poe orbs, which is truly a currency within the path of exile video game, utilize to enhance products, and also by wiping out creatures as well as completing quests, you can acquire the orbs proficiently within the game. One can even buy poe orbs with the help of the MMOGAH web site which is even regarded as a reliable website. In the event that online users make use of this website online, they are able to obtain specifics about buy poe orbs.

A lot of people love playing absolutely free video game named World of Warcraft and people obtain entertainment simply by actively playing this online game. The video game gives the digital currency to enhance the effectiveness of tools as well as to purchase various things in the video game. Several video gaming internet sites help individuals to acquire the currency effectively. When you visit this unique internet site, you can obtain a growing number of details about wow gold on the net platform.

wow classic gold cheapest is actually an adventure activity which is played via numerous gamers. This video game is actually widely prominent amongst individuals as it supplies quite a few excellent features. There is also a digital currency accessible in the actual gaming which supports the avid gamers to get many items. To grasp the actual guidance of classic wow gold, people can take a look at the following link .

Over-all, it's the perfect spot to buy archeage unchained gold securely and safely. Their customer support services are available 24 x 365 for client care service thru live chat. Start to learn about archeage gold, click on the following link.