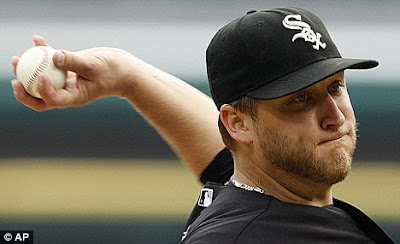 Congratulations to Mark Buehrle of the Chicago White Sox, who on Thursday became just the 18th player in major league history to throw a perfect game.

Buehrle also threw a no-hitter two years ago, so by retiring all 27 Tampa Bay Rays batters, he joined Hall of Famers Cy Young, Sandy Koufax, Joss Aldie, Jim Bunning and, it's safe to say, future Hall of Famer Randy Johnson on the even shorter list of players with a perfecto and a no-no (three no-hitters in Koufax's case). Interestingly, the home plate umpire was Eric Cooper for both of Buehrle's no-hitters.

Most no-hit artists do it with overwhelming power. Take Nolan Ryan, who hurled a record seven no-hitters, plus 12 one-hitters. The hard-throwing Texan blew people away with good old country hardball for twenty-odd years, retiring as the all-time strikeout leader with 5714. Ryan sent so many batters back to the bench on strikes that it stands to reason he threw so many no-hitters. (He also signed a baseball for me when I was a kid; I still have it.)

Buehrle is a more interesting case. He's not a strikeout artist, with neither blazing speed nor a huge breaking ball. He only threw six strikeouts in his perfect game. Buehrle throws a lot of balls over the plate (about two-thirds of his pitches Thursday were strikes), lets the batters put the ball in play and relies on his fielders to make plays. Unlike many of his no-hitter brethren, the Randy Johnson types, he invites batters to make contact.

Buehrle wins games with his mind, keeping batters guessing by changing speeds and locations. Crucial to his success is an excellent changeup, which looks like a fastball as he delivers it but comes in more slowly. Thus, batters can't be sure when to swing. Buehrle's fastball isn't particularly fast at around 86mph, but since he mixes in the change so effectively, it's fast enough. Throw in a decent curveball and they're usually puzzled. Plus Buehrle gets a lot of first-pitch strikes so he's often ahead in the count, making batters swing at questionable pitches to protect the plate.

The other thing I like about Buehrle is that he works fast. As soon as the catcher throws him the ball, he's ready to throw another pitch. He's frequently waiting for the batter to get ready. His perfect game took just two hours and two minutes, with Buehrle on the mound for just 32 minutes total. I've seen half-innings longer than 32 minutes. (Of course, in this case it helped that he faced the minimum 27.)

Between his deceptive ability to get batters out, his lack of overwhelming stuff, and the quick games he throws, Buehrle reminds me of Greg Maddux. That is a good player to be like.

It usually takes a little luck to get a no-hitter, let alone a perfect game. Buehrle got his share Thursday as two slashing line drives landed just foul of the third-base line, one of them nearly disemboweling umpire Laz Diaz, and rookie sensation Gordon Beckham made two strong plays on hard ground balls at third base.

But the play of the game came in the ninth inning. With the White Sox staked to a 5-0 lead thanks to Josh Fields' grand slam (the only one ever hit in a perfect game), manager Ozzie Guillen defied superstition and put little-known DeWayne Wise into center field as a defensive replacement.

What a move that was. The next batter, Gabe Kapler, crushed a ball to deep left center. Wise tracked it off the bat, smoothly went back, timed his leap off the barrier and made a circus catch over the wall, robbing Kapler of a home run. The ball wasn't firmly in his glove and he nearly dropped it as he brought it back into fair territory, but he used his other hand to complete the catch and keep the ball from touching the turf as he rolled to the ground. It was not only the best catch in recent memory but also, given that his pitcher was 24 outs into a perfect game, instantly one of the most dramatic and satisfying plays of all time.

Happily, with that massive reprieve under his belt, Buehrle finished the job, inducing a strikeout and a groundout to complete the perfect game. Against a defending pennant winner, no less.

You had to feel happy for Mark Buehrle, a likeable all-American guy from small town Missouri who has made no secret of his desire someday to pitch for his hometown St. Louis Cardinals. He got to do the next best thing at the All-Star Game in St. Louis a few weeks ago, pitching a perfect inning in what turns out to have been foreshadowing. After his perfect game he got a congratulatory call from the other guy who wore White Sox attire on the field at the All-Star Game, President Barack Obama.

Sure, his teammates loved it, but even his fellow players on rival teams were excited for him. Video replays showed the Philadelphia Phillies whooping it up like a bunch of little kids as they watched Buehrle's perfect game live in their clubhouse before their Thursday night game. And Detroit first baseman Miguel Cabrera reportedly shouted across the field "Good job! Way to go!" and and gave Buehrle a thumbs-up on the day after the perfect game.

Video of Wise's amazing catch is here. The box score and more video are here.
Posted by Ben at 1:30 PM

A game addict can readily obtain many elements in the old school runescape game just with the help of a digital money referred to as osrs gold. Gamers also can buy osrs gold merely by using MMOGAH, which is one of the better online gaming websites. In case you go to this particular website, you can find progressively more knowledge about osrs gold on the internet system.

The particular path of exile is usually one of the top fighting activities which are desired by a number of people. This video game provides a currency that assists the players to buy a number of things in the game along with a person can also boost the durability of weapon by making use of the digital currency. Gamers are also able to buy the Poe currency from reliable on-line video gaming store. One can look at the internet site to obtain entire details about Poe shop.