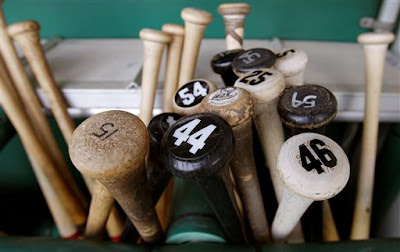 As last baseball season headed into the home stretch, the Chicago White Sox tied a major league record by hitting home runs in four consecutive at-bats. They became just the sixth team ever to pull off the memorable feat.

Those back-to-back-to-back-to-back shots, along with further deep-drive dramatics as the season drew to a close, were all the excuse I needed to wax profound on the interesting (to me, anyway) subject of historic home runs.

In a thundering coda to the homer-happy close of their 2008 season, the ChiSox have resumed their stylish slugging. When Paul Konerko and Jermaine Dye went deep back-to-back yesterday, it was the 300th career home run for each player and an elegant way for two exemplary major leaguers to mark the milestone. Teammate Carlos Quentin chipped in 2 HR of his own in a White Sox victory. Keep hitting them, boys.