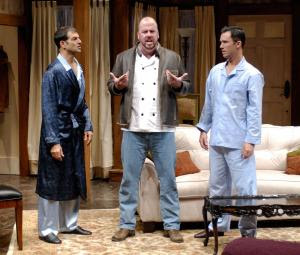 It's in Chicago now, playing the Royal George Theatre in a sparkling new version that's drawn enthusiastic crowds and widespread critical raves. It's an Equity production with an accomplished cast; Jeffrey Donovan (at right above) recently starred opposite Angelina Jolie in Clint Eastwood's movie Changeling, and castmates Spencer Kayden (Urinetown) and Mark Harelik (The Light in the Piazza) and director John Tillinger are Broadway veterans.

With Boeing-Boeing having played Broadway to popular acclaim and won two 2008 Tony Awards, the repeatedly extended Don't Dress for Dinner has all the earmarks of a New York transfer. Sure enough, producer Robyn Goodman (Avenue Q) is reportedly raising money for a Broadway run.

Time's running out, but you can still catch it locally before it closes at the Royal George on April 12. My Flavorpill preview is here.

p.s. As for not dressing for dinner, I usually don't either, but then I've also been known to have Cinnamon Toast Crunch for dinner, so don't model your behavior on me.
Posted by Ben at 2:26 PM