Every move that she makes 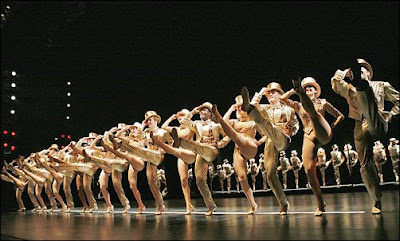 "Dunt, dun-a-nunt, dun-a-nunt."
If you know the tune to that phrase, you'll be happy to hear that A Chorus Line returns to Chicago this week. Indisputably among the greatest musicals of all time, it recently wrapped up its successful revival on Broadway and now hits the road.
I'm not even a big musical theater guy but I've liked A Chorus Line ever since New Trier Township High School in Winnetka, Illinois became the first high school in the nation to perform it while I was a student there. Landing the show was a coup and New Trier rose to the occasion, staging a high-quality production complete with costumes flown in from Broadway.

To their credit, my fellow students stepped it up with A Chorus Line, blowing the roof off the place to a huge ovation. Granted, the audience consisted primarily of proud parents and easily impressed teenagers (including myself), but I still remember how flat-out excellent I thought it was. A Chorus Line was then in the midst of its record-setting original Broadway run and I bet the big kids would have liked our version.
As opening night at New Trier approached, controversy swirled around the number "Dance: Ten; Looks: Three," more commonly known by its familiar refrain, "Tits and Ass." The song was deemed inappropriate for a high school production and removed from the show. After a major hue and cry about artistic blah-de-blah, it was reinserted with the new lyrics "Swerves and Curves." Predictably, the tempest in a teapot had a Heisenberg effect as thousands of local schoolchildren, most of whom never would have seen the show either way, ended up talking for weeks about tits and ass.
Broadway In Chicago's presentation of A Chorus Line previews tomorrow evening at the Ford Center for the Performing Arts, Oriental Theatre, opens Wednesday and runs through May 3.
My Flavorpill preview is here.
Posted by Ben at 10:01 AM

You may have forgotten that the NT version also omitted that the one guy was gay. So when he was going on about his issues with his family, etc., he just sounded whiny.

Thanks for chipping that in. I don't remember ever hearing about it.

Ha! I love the compromise of "swerves and curves" -- made me laugh out loud. High school!

Yes, I remember it well, and in fact, had the joy of singing those silly words! My other favorite line was "rode the bike and pressed with care" instead of "where the cupboard once was bare"- priceless! I was just happy that they caved and I got my solo back, I must admit :)