You gotta have faith

In early June in this very space, I recommended a comedic solo double feature playing at Second City, Nicky Margolis' Split! and Pat O'Brien's Shatter, which I wrote about for the culture guide Flavorpill here.

I hadn't seen it at the time, which is unusual. Flavorpill's mission statement is "filtered content," meaning each writer is personally vouching for the event in question. Generally we attend a preview, press night or early performance whenever possible, both to decide whether to recommend a show and to incorporate its content into the writeup.

A perfect example was last summer, when my then-editor asked me to see the first of two performances of the intelligent young comedian Kumail Nanjiani's new monologue show Unpronounceable at the Lakeshore Theater. I caught the show in July with no pressure to write anything, but with time enough to preview the August performance if I so chose.

I found Kumail's show moving, thought-provoking and hilarious, so it was my pleasure to recommend it. Happily, the August show sold out and it met with a huge response as it had in July. Soon after, Kumail moved to New York City, where he's burning a trail through the standup scene.

Sometimes, however, it's not possible or practical to see a show before writing about it. When a band is on the road, for example, playing one Chicago show three weeks hence, there's no easy way to catch the current tour before the night in question. It's too late to write about it after it's over since we don't write reviews, only previews. So we might recommend a band's local show if we think their body of work or their new album merits it.

Another example is a short theatrical run. Our editorial turnaround time can be a week or more, and our popular weekly email blast arrives up to a week before an event occurs. Thus we usually work several weeks ahead of events. When a show is only playing for a short time, its run might be half over if we wait until after seeing it to write it up, so for practical reasons we take the occasional educated guess.

I did this with Avenue Q, which only played here for a couple of weeks. Having loved it on Broadway, I felt confident that the touring version would be close enough to the original that I could recommend it without seeing the road company, so I chipped in a recommendation sight unseen. My faith was borne out when I saw the show ten days later; it was terrific. 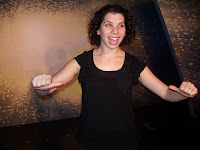 I took another flier with Split! and Shatter, initially booked for a short six-week run. I know both Nicky and Pat from my years of performing at the iO Theater (née ImprovOlympic) and went through a year of improv classes and performed with Pat. They are elite improvisers, two of the top young comedic talents in Chicago and rising stars in the Second City family, so based on this personal knowledge I recommended their double feature.

Once again, my faith was completely justified. The double feature became a big hit and was extended to last night, when I finally saw it and learned why.

Both shows are outstanding. Pat and Nicky's writing proves to be as good as their improvisation. Their shows are funny, funny, funny. Good character work, top-notch sketches, original ideas, great jokes and concepts that pay off in spades.

Nicky shows her range, deftly weaving a variety of characters into a seamless, entertaining show, and it turns out she can sing too. She employs a "live backstage camera" so two of her characters can interact, and what starts as a standard pretaped bit gets a lot more interesting when she runs "backstage" and, like Hayley Mills in The Parent Trap, not one but two characters played by Nicky interact onscreen. Impressive as it is, the technical wizardry is merely in service of a big, funny closing musical number.

Pat offers up some really good sketches, including a couple that pay off hugely using the lyrics of trite Top 40 hits we hear all the time but never really notice. He opens with a loose, funny scene in which he attempts to break a series of randomly chosen Guinness world records live on stage. Each attempt, of course, fails miserably, but with his winning charm and amusing ad libs, the scene itself succeeds gloriously.

Apparently a fair number of other friends also waited until the last minute to see the show because the closing night crowd was packed with familiar faces from around the Chicago comedy scene. The 160-seat Second City e.t.c. was sold out on a Tuesday night (as Carlos Zambrano was facing fellow All-Star Ben Sheets, no less).

Pat's family made the trip in from Michigan and he managed to involve his mom, the nicest, politest mom you'll ever meet, in a hilarious bit. He claimed to have randomly preselected one seat in the audience to read some dialogue with him. The winning seat was his mom's, and she dutifully put on her reading glasses and read a few cringeworthy, sex-charged lines with him to roars of laughter. The dialogue was on every table in the house so the audience could read along (and read ahead). He cut it short just before she got to the dirty part.

Sure, I was there as a (p)reviewer, but on the personal side I'm really happy for both performers. They did a fantastic job and deserved the huge ovation they received. I'm proud of them.

I wish there were still time for you to catch the solo double feature, because it was pretty much what the Milwaukee Brewers hit against the Cubs on Monday night: back-to-back home runs. But it's over now, although Pat and Nicky may remount their shows elsewhere around town at some point. Pat's also taking Shatter to the D.C. Comedy Festival next week.

Congratulations to those of you who took my advice in early June and saw this excellent pair of shows. Readers of Ben Bass and Beyond, you gotta have faith too.
Posted by Ben at 11:20 PM