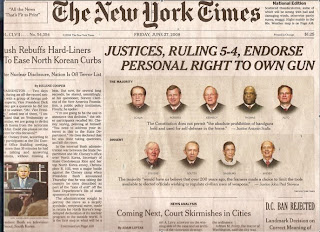 Decades of lobbying by the NRA, a neocon in the White House, Justice Samuel A. Alito Jr.—blame what you will, but it's come to this. The U.S. Supreme Court has found in the Constitution an individual right to own a gun for personal use.

The Second Amendment, lest we forget, reads as follows:

A well regulated Militia, being necessary to the security of a free State, the right of the people to keep and bear Arms, shall not be infringed.

Once again selling out his so-called originalist approach to constitutional interpretation when it's politically expedient, Justice Antonin Scalia, writing for the majority, rejected the widely held view that the Framers established arms rights as a matter of national security in wartime, despite their explicit words to that effect.

And thus are we, as a nation, a poorly regulated militia.

Sandra Day O'Connor, where are you?
Posted by Ben at 7:40 AM