Going to the movies

As you know, it's easier than ever to see a movie without going to a theater. Your TiVo (DVR, Netflix, pay-per-view, houseboy) will provide movies in your living room to your heart's content. If you forget to TiVo your movie, HBO On Demand will serve it up. There's also usually a mediocre romantic comedy playing on TBS. After that's over, you might actually consider going outside.

Even brand-new theatrical releases are available at home, where any six-year-old with the inclination and hard drive space can illicitly download them. They're also available on DVD from a horse blanket on Canal Street if you're cool with your money going to Chinese pirates rather than Warner Bros.

Like most people I don't support these unofficial distributors, but volume is not an issue (or it is, but in the sense that we're bombarded with too much of it). At any given time there are eight or ten movies waiting forlornly on my TiVo box or DVR for some attention.

Will I get to them? Not likely. I also TiVo my favorite TV shows, plus the Howard Stern radio show plays on a 24-hour loop on Sirius. The Stern show is as addictive as a soap opera, plus unlike a movie I can half-listen to it while, for example, writing this.

Movies were the first casualty of my surfeit of entertainment options. I record them not because I'm intent on watching them but to provide a decent selection on the rare occasion I want to watch one.

In this climate, there's little incentive for someone like me to head to the local cinema. It's so much easier to kick back and watch a movie at home, where I've already paid for it. (Apparently I'm a hypocrite because I just paid a good nickel to see Chris Rock at the Chicago Theater on Sunday night performing what will surely end up as his next HBO special.)

Plus at my house we don't get too many morons bringing a screaming 18-month-old to a Saturday 9:30 p.m. show, which ruined Something's Gotta Give for three friends and me at the City North 14 on Western Avenue.

Who cares if the movies aren't brand new? I finally saw Harry Potter 5 on cable last week. Did it matter that I missed it in the theater? I'd already forgotten it five minutes after it ended. 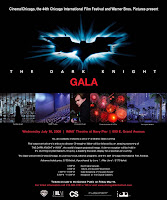 For all of the above reasons, plus the fact that I'm a bad sleeper and I try to avoid being downtown after 11 p.m. on a school night, I passed on an admittedly cool event last week: the Dark Knight Gala at the IMAX Theater on Navy Pier (see right), a red-carpet preview screening and party with such dignitary guests as director Christopher Nolan.

After serving for years on the Associate Board of the Chicago International Film Festival, I remain a member and support the festival every October. They provide preview screenings throughout the year (most of my trips to movie theaters are for these) and occasional big-ticket glam fundraising events like the Batman party.

I'm happy to go to a new movie when someone else suggests it. Last year some buddies and I caught Sunday matinees of The Simpsons Movie (liked it) and The Bourne Ultimatum (loved it) and we had a great time. But I only went at their invitation; the idea of going literally never occurs to me.

Of course, there are still plenty of reasons to go to the movies: to catch the hot new release everyone's talking about; to lose yourself in the immersive environment of a large screen and surround sound; to share a communal experience with like-minded strangers; to see The Crying Game or The Sixth Sense before someone ruins it for you. Plus not everyone has Netflix or cable, and there will always be millions of kids looking for something fun to do in the summer.

It wasn't just the kids who came out to support the Batman movie, which set a new box office record for an opening weekend. With a slew of positive reviews and so much word of mouth I can hear the buzz coming through my window, it's looking like the movie of the year, as beloved as WALL-E, a thinking man's superhero movie in the vein of Iron Man.

Naturally I haven't seen any of these, but I look forward to catching them on HBO next year.
Posted by Ben at 8:30 AM

I just saw "Wackness" with Ben Kingsley, good real life flick, but the interesting thing was I was the only person in the theater. It was after work on a Monday, but I thought someone else might be seeing it as well. That has never happened before, it is kind of a strange feeling. The crowds were for Batman playing on the other 6 screens.

I saw Batman after work last night. I walked over to the Village North, where I four movies were showing. I can't remember another time in a similar situation when the ticket person didn't ask me what I was there to see. At the last minute I finally said I was there for Batman, and in a good-natured way he looked at me like, "Duh, really?" The 9:30 show probably missed selling out by 10 seats. This movie is a real phenomenon, business-wise. (Another 'duh') And oh - it's a wild ride and a lot of fun to see in the theatre.

Unlike my brother, I see movies in theaters all the time. I don't have TiVo, a DVR, cable...or a television. I haven't lived in a place with a TV since I had a roommate in 2000. I get my news from NPR and internet, and there's seldom much I'm interested in watching on TV. And besides, I figure one "idiot box" is enough in my place, and I'm on the one right now.

Signing off it -
JLB