I know it when I see it

A byproduct of the desktop publishing revolution is an increased awareness of and interest in print typefaces. The Microsoft Wordification of this planet has made the word "font" more than just an archaic synonym for fountain.

Heck, there's an entire documentary movie about Helvetica type, which I previewed for Flavorpill last year like so:

Developed in 1958 in a Swiss type foundry, the omnipresent typeface Helvetica takes its name from "Helvetia," Latin for Switzerland. Its clean lines and smooth curves, well, typified the advertising industry's no-nonsense '60s movement away from flowery postwar design excess. Thought to imply stability and efficiency in a time of social upheaval, Helvetica rapidly metastasized worldwide like a benign virus that lingers to this day in glossy ads, trendy signage and the brand logos of American Airlines, 3M, Lufthansa and Panasonic. Cementing its universality, the sans-serif juggernaut now has its own eponymous documentary. Though it explores the rarefied niche of font creators and kerning geeks, the film has widespread appeal, having broken Siskel Film Center box office records this summer.

I liked the movie though I know little about visual style and layout. As Justice Potter Stewart memorably opined about obscenity, I just know good design when I see it.

Take, for example, the New Yorker magazine, whose clean, smart appearance nicely counterpoints its crisp prose. The look is at once classic and timeless: although many of its visual elements date back to its February 1925 founding by Harold Ross, it's somehow not dated. Plus it's distinctive. Flip to any page of the New Yorker and you immediately know what magazine you're looking at. 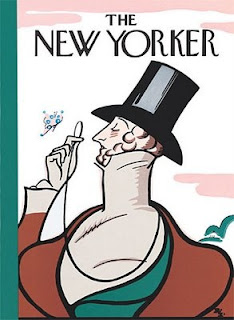 Let's hear more about it from someone who knows plenty: New Yorker enthusiast and FOBB&B Emily Gordon, whose website Emdashes lovingly chronicles the magazine in exhaustive detail.

Unlike me, Emily's not merely a casual observer. Her day job is managing editor of PRINT magazine, where she recently chipped in this gem on Rea Irvin, the founding art editor who established the New Yorker's visual style. Among his many lasting touches are iconic swell and de facto mascot Eustace Tilley, pictured at right, and the New Yorker's signature font, which now appropriately bears his name.

The truly unpretentious nature of the writing of the New Yorker is clearest in the "Shouts and Murmurs" section. Any magazine that prints a lovingly composed work of absolute nonsense by Steve Martin from time to time is worth giving a shot.