This week's Friday performance comes from the inspired musical pairing of Robert Plant and Alison Krauss, whom I had the pleasure of seeing (read: hearing from the lawn) Wednesday night at a very sold-out Ravinia Festival.

Great concert. Alison Krauss and her regular band, Union Station, have won a legion of fans and a shelf full of Grammys with their tasteful, authoritative bluegrass sound. Her haunting, beautiful voice recalls that of a young Emmylou Harris. Apparently Robert Plant was also in a band.

The Ravinia stage fronts a large open-air pavilion with several thousand seats and a roof but no side walls. The music is also amplified around the rest of the grounds, consisting mostly of a lush, expansive lawn where concertgoers enjoy catered picnic dinners or wine and cheese while listening to the performance as the sun sets. It's pretty much a Led Zeppelin vibe.

Those with lawn tickets can check out the stage from outside the pavilion. Ordinarily you can just walk to the back of the seats and look down at Tony Bennett, Wynton Marsalis or whoever.

But Krauss and Plant, one of the most sought-after tickets of the Ravinia concert season, drew a capacity crowd; even the lawn sold out, a rarity. People were stacked five deep craning their necks to catch a glimpse. It was like the Champs-Elysées at the end of the Tour de France and a good time to be 6'4".

Several people around me held cameras aloft, shooting both video and still pictures. Someone emailed me this photo of the stage: 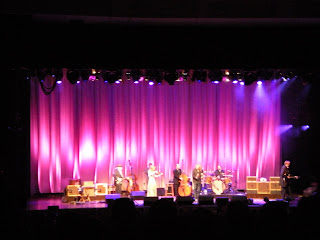 Ravinia is best known as the summer home of the Chicago Symphony Orchestra. Krauss and Plant delivered a few classics of their own, including this one:

it's a great record, i hope they make another one. it was so well received that there's every reason to.

Interesting how these (old time) rockers have reinvented themselves.
Never understood the lawn concept at Ravinia. I go to a concert wanting to hear and see the band. The times I have gone (Bruce Cockburn and Lisa Loeb)it was very crowded and we were on the lawn, I did have to walk up to see the bands. But I guess you go for the ambiance and to drink a little wine on a blanket.

That should be Bruce Cockburn and Susanne Vega not Lisa Loeb.

"Lovers in a Dangerous Time"
"Rocket Launcher"
and
"Luker" ?

Dude, I've never seen the Ravenswood Metra station parking so jammed packed. Gas prices have forced people to the train. It was unreal. After 5pm, there usually isn't a car to be found in those diagonal spots. Not the case Wednesday..