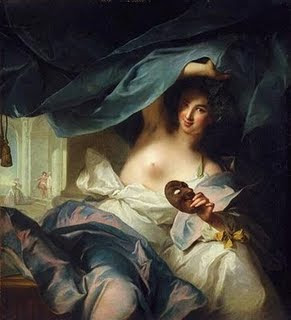 You know who that was, right? In Greek mythology? The muse of comedy, of course, and so a personal favorite deity of mine.
In her spirit, some FOBB&Bs are doing their part to inject some levity into our serious world. Here's a rundown of the latest comedic work from my peeps:
1. Live.
All-around great guy Dave Facchini is the impresario behind the popular Creepy Hug sketch comedy series. Their latest show, Dirt Nap, wraps up its current run tonight and tomorrow night at 8pm at the Gorilla Tango Theater, 1919 N. Milwaukee Ave., Chicago. Tickets $12 at the door. (773) 598-4549; gorillatango.com.
2. Print.
The witty Caprice Crane cranked out some of the best shows MTV aired in the 1990s. More recently she's writing Hollywood screenplays for Scarlett Johansson and scripts for the new 90210 and Melrose Place when not publishing a series of hit novels.
In New York? Catch Caprice tomorrow evening at 7:30 p.m. at the Lincoln Triangle Barnes & Noble, 1972 Broadway at 66th St. across from Lincoln Center, where she'll read from and sign her latest book, Family Affair. If you're looking for a good read, treat yourself and buy it here.
3. Online.
During my recent trip around the Bay Area, I met a very cool Silicon Valley entrepreneur named Gerry Mack. He told me about the world of dot-com startups, his expertise underscored by the fact that we were sitting a block away from Facebook's Palo Alto headquarters at the time.
Gerry is backing a new interactive improv comedy site called Daily Improv, a beta version of which is up and running here. Check it out, comedy fans.
p.s. I'd next cover Erato, the muse of poetry, but as a longtime philistine of good standing, all I know is that because her name begins and ends with a vowel, she's a regular answer in my beloved New York Times crossword puzzle.
Posted by Ben at 12:00 PM