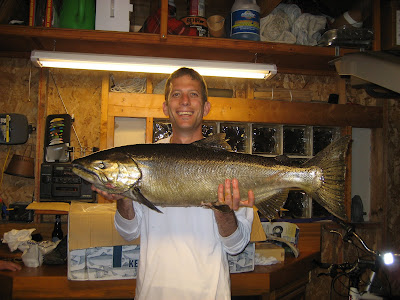 The above good-looking guy is my brother, Ari Bass, who recently hauled in this Chinook salmon from the chilly waters of Burnham Harbor in downtown Chicago. (My brother is the one in the white shirt.)

When he emailed me the above photo I initially assumed it was one of the salmon he caught last summer while deep-sea fishing in the Pacific Ocean off the coast of Alaska. But no, he caught this one here. I didn't even know we had salmon in Lake Michigan. 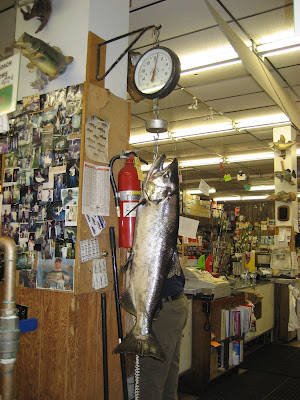 Look at the size of it. Not only did he land this beast unassisted, he did so during a citywide fishing tournament called the Richard J. Daley 2009 Memorial Sportfishing Derby. At 20 pounds, 11.5 ounces and 39 inches, Ari's catch was good for first place at the time in the Chinook (King) Salmon category. It's since been surpassed by at least one larger fish. I blame steroids.

As much as our parents would prefer to see one of us deliver something else at 20 pounds, 11.5 ounces, namely a set of triplets, we're all proud of Ari. Good job!

p.s. Those who were awaiting today's big announcement involving a Chicago sporting competition and a mayor named Daley can now breathe easy. Wait, there's another one?
Posted by Ben at 6:00 AM