On the road with Steve Martin 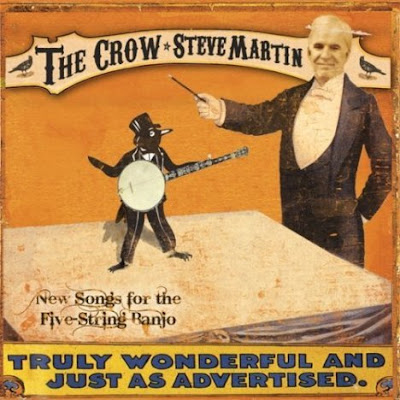 Last night I caught the best bluegrass show starring a comedy legend on banjo that I've ever seen.

Wait, let's not qualify that so much. It was one of the best shows I've ever seen, period.

Regular readers of this space will recall that Steve Martin, a serious banjo player who occasionally dabbles in comedy, is touring in support of his new bluegrass album, The Crow: New Songs for the Five-String Banjo. I wrote a Flavorpill preview of his highly anticipated Chicago show that went over well and the promoter generously offered me tickets to last night's performance at the Cadillac Palace Theatre. (FTC disclosure: check.)

And what a show it was. Steve Martin is not merely a competent but an outstanding banjo player. And the band he brought! He's touring with the Steep Canyon Rangers, a six-man tornado out of North Carolina that has to be the best bluegrass band anywhere. And if they're not, please tell me who's better so I can go see them too. The Steep Canyon Rangers are jaw-droppingly good. Virtuosic, entertaining as hell, and like Steve Martin, great songwriters too. As Steve said onstage, "These guys are hard to get. They're usually ranging steep canyons."
The Rangers won a lot of new fans last night. If Steve Martin is what it takes to pack two thousand curious bluegrass newcomers into a theater, good. They deserve it and so does their genre in general. I will definitely go see these guys again. I haven't enjoyed a concert that much in years.

And when you've got Steve Martin as your frontman, the between-song patter is the bonus, an A+ comedy show that carries the momentum between songs and keeps the audience smiling (though the songs did plenty of that too). I always like it when bands are funny onstage; in fact, there have been times when I'd have preferred that a band keep talking rather than resume playing. Ideally you get a Matt Wilson type, an excellent musician who is also brilliantly funny.

Still, there are a lot of armchair Steve Martins, but there's only one Steve Martin, and he had the huge audience in the palm of his hand. His between-song conversation was charming and hilarious in just the right amounts, meticulously written and impeccably delivered in classic Steve style. I won't repeat his jokes here because he's using the same material throughout the tour, but if he comes through your town and you hate bluegrass music, you should still go see the show because every three minutes you'll be laughing yourself silly.

As if that all weren't enough, Steve's publicist was nice enough to put us in the middle of the sixth row, an ideal vantage point from which to be blown away. It felt like a small club and we had to turn around for a reminder that we were in a cavernous old downtown theater.
And as if that weren't enough, I was fortunate enough to be invited backstage after the show to say hello to the band. There was also a guy back there who introduced himself to me as "Steve." He once made a movie called The Lonely Guy but I think there was a typo in there because Steve Martin is a lovely guy. He and his wife are lovely people both, cultured and articulate.

And the Steep Canyon Rangers are too, personable gents who've risen to the top of the bluegrass world by dint of prodigious talent and hard work. Good for them that they hooked up with Steve Martin, and good for him too. They deserve the exposure and excitement of playing beautiful theaters before large crowds, and he in turn gets a crack band to help him realize his creative vision for his music. It's an elegant pairing.

After years of loading one's own gear into vans and staying in modest accommodations, there are benefits to touring with a huge celebrity. While we chatted backstage, the band was informed that rather than heading to the airport at 8 a.m. as originally scheduled, they'd now have a limo waiting at noon because they'd be flying to Denver in a private plane.

The band is also seeing a side of show business they hadn't seen before. Vince Gill showed up at their gig in Los Angeles and sat in for a few songs. Ed Helms was there too, a banjo player himself. Steve's friends Lorne Michaels and Paul Simon keep popping up on tour, sometimes with junior sidekick Jimmy Fallon in tow. Fallon, a newcomer to bluegrass, loved what he heard and invited the band back to play his television show. If it's good to be the king, it ain't bad being all the king's men.

Steve and the Rangers also played David Letterman's show on the Monday night after the unfortunate news of Dave's personal problems broke over the weekend. It was the highest-rated show Letterman's ever aired, outdrawing any show that evening in prime time. Forty million people tuned in to hear Letterman talk about extortion and apologize to his wife, but his pain was the band's gain. More people saw the Steep Canyon Rangers play that night than will ever see them play live, and they won a legion of new fans.
The only drawback for them is that, while in theory they stand to get paid anew every time that episode of Letterman is rerun, given its awkward monologue at the top of the show, there's no chance it will ever see the light of day again.

Some have wondered why Steve Martin, a searingly effective comedian without peer, has taken such a lengthy career detour into inoffensive family film comedy. It's a reasonable question and one I wouldn't profess to answer, but I speak for many delighted new fans of his music when I say I'm happy he's doing what he's doing right now. And so, it's quite apparent, is he.
Posted by Ben at 7:00 AM

He is a fabulous musician as well as an amazing writer. Damn him!

All true. But buddy, you're not so bad yourself.