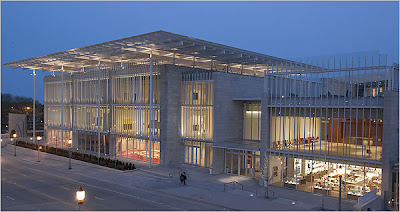 On Friday evening I had the privilege of attending the opening night of the new Modern Wing of the Art Institute of Chicago. Architect Renzo Piano designed the $294 million addition to Chicago's most significant art museum. At 264,000 square feet, the expansion makes the Art Institute the nation's second-largest art museum after the Metropolitan Museum of Art.

Even before we got there, the drumbeats were starting. For example, on Thursday, two of the three Arts headlines in my daily New York Times email blast were Modern Wing-related:

ARCHITECTURE REVIEW
Renzo Piano Embraces Chicago
By NICOLAI OUROUSSOF
The new Modern Wing of the Art Institute of Chicago is the closest Renzo Piano has come in at least a decade to achieving a near-classical ideal.

ART REVIEW
A Grand and Intimate Modern Art Trove
By ROBERTA SMITH
The elegant new Modern Wing is a rarity: a work of genuinely good architecture that is also kind to art.

The Times coverage also includes nifty slide shows of the Modern Wing's collection and its architecture, including the photos above and below by Michelle Litvin.

I share the Times critics' glowing assessment of the Modern Wing: it's at once a satisfying modern art collection and an artistic accomplishment in itself. (Fittingly, a hand-drawn Renzo Piano sketch of the Modern Wing hangs in its architecture room.) As splashy as the building is, once you get into its display halls, you're in an outstanding new art museum. 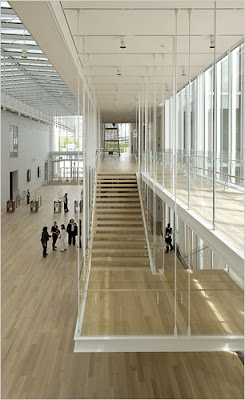 The heart of the addition is an open, naturally lit 30-by-30-by-300-foot entry hall. It's anchored by a floating staircase inspired by the renowned one Ludwig Mies van der Rohe designed for the Arts Club of Chicago. Coincidentally, I'd attended an event at the Arts Club a few days before. It was like saying hello to mother and child.

After benefactors and dignitaries like Mr. Piano enjoyed a formal dinner, the 10pm "Young Modern" opening night party for the rest of us was -- what did the kids say in 2006? -- off the chain. Twelve hundred people in "modern cocktail" attire crammed into Piano's sweeping entry hall for a fashion show and cocktail party; Regenstein Hall transformed into a dance club with trendy DJs; and the doors were thrown wide for partygoers to enjoy the collection and new building. Enjoy we did.

Admission to the Modern Wing is free to the public all week as the Art Institute continues to celebrate its grand opening. Check it out.
Posted by Ben at 8:30 AM