The Addams Family, a new musical 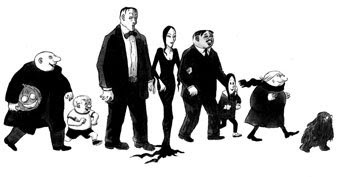 I've never paid much attention to the Addams Family, but as a longtime subscriber I have a warm feeling for them as a beloved part of the New Yorker canon. I was heartened to learn that the new show will be based not on previous Addams Family television shows or movies but on Addams' original drawings. It will be their first musical.

The press conference was a well-produced affair at the Arts Club of Chicago. Surrounded by original Addams artwork, producer Stuart Oken opened the afternoon by recounting the artist's story.

Born in Westfield, New Jersey, Charles Addams wanted to work for the New Yorker from his early childhood. He first sold the magazine a drawing in 1933 at the tender age of 21, launching a beautiful relationship that saw the publication of thousands of cartoons, sketches and drawings over six decades.

A few years after joining a New Yorker artistic staff replete with such greats as Saul Steinberg, Helen Hokinson, James Thurber and Peter Arno, he started drawing his now-familiar characters in 1937. They took ten or eleven years to catch on, and weren't officially a family (or even named) during that time.

After the characters became staples in the New Yorker and elsewhere, Addams agreed to allow the creation of a television series based on them. In order to help the TV writers understand the characters, Addams provided a short summary for each. Two of them looked like this: 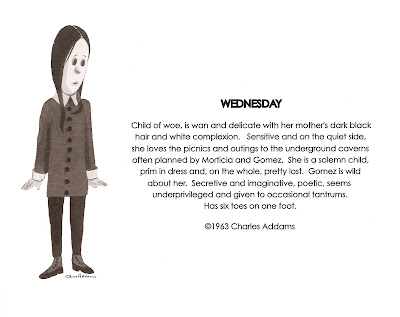 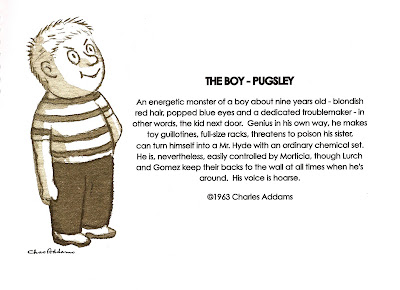 (Excerpted from The Addams Family: An Evilution, to be published in 2010; copyright Tee and Charles Addams Foundation.)

The shy, reserved Addams was shocked and mortified to learn that the television producers decided to name the characters "The Addams Family." Not exactly the Hollywood type, he'd modeled the Uncle Fester character after himself.

The Addams Family musical will take the characters in a new direction. The daughter, Wednesday, now eighteen years old, has a new boyfriend. He and his family are invited to dinner at the shabby, haunted Addams mansion, setting up comedic fireworks as the mainstream and ghoulish worlds come together. Meanwhile, doting father Gomez Addams struggles to accept that his little girl is growing up.

The creative team includes composer-lyricist Andrew Lippa (The Wild Party) and book co-writers Rick Elice and Marshall Brickman (Jersey Boys); Brickman is also a frequent Woody Allen collaborator. Lippa and Elice made the trip into Chicago for the press event, where they debuted three of Lippa's original songs with a rousing live performance.

The Addams Family will premiere in Chicago for eight weeks starting in November, then transfer directly to Broadway.

Tickets are already on sale to American Express cardholders, and go on sale tomorrow morning to the general public. From a recent press release:

Individual tickets will go on sale Friday, May 29, 2009 at 10 a.m. for THE ADDAMS FAMILY, a new musical starring two-time Tony Award winners Nathan Lane and Bebe Neuwirth as Gomez and Morticia. THE ADDAMS FAMILY will make its pre-Broadway world premiere in Chicago for a limited engagement beginning Friday, November 13, 2009 through Sunday, January 10, 2010 at the Ford Center for the Performing Arts, Oriental Theatre (24 W. Randolph St., Chicago).

Individual tickets range in price from $28 to $105. A select number of premium seats are also available for select performances. Tickets are available at all Broadway In Chicago Box Offices (24 W. Randolph St., 151 W. Randolph St. and 18 W. Monroe St.); the Broadway In Chicago Ticket Line at (312) 902-1400; all Ticketmaster retail locations (including Hot Tix and select Carson Pirie Scott, Coconuts and fye stores); and online at www.BroadwayInChicago.com. Tickets are available to groups of 20 or more by calling (312) 977-1710.

I saw The Addams Family last year and loved it! Lane and Neuwirth were fantastic as well as Krysta Rodriguez. The story line and music were very entertaining and tickets weren't cheap, i got them from Ticketsinventory.com ...hopefully they do make it on Broadway again. http://www.ticketsinventory.com/theatre/the-addams-family-tickets/
It’s one of my favourite shows; I would see it again in a heartbeat!