I write to you today a one-legged man.

Effectively, at least. I still have both legs, thank God, but I only have the use of one of them after a freak injury yesterday. I was on the tennis court playing doubles when an opponent hit an ineffective drop shot. I rushed forward to put away the short ball, but instead of seeing my own winner, all I saw were stars.

Out of nowhere, an intense pain shot through my right calf. It was as if my doubles partner had hit me in the leg with his racket as hard as he could. However, since my partner was forty feet away at the time, and was my dad, I knew that couldn't be. It was so sudden and so painful that I also wondered whether I'd been shot, but gun violence has not historically been a problem at the Deer Creek Tennis Club in Highland Park, Illinois.

I felt certain that I'd been struck by an errant ball from another court, but after I fell to the ground and looked around, I couldn't find one. The truth became clear as my dad explained that he'd suffered the identical injury on a tennis court the day before I graduated from law school. He also thought he'd been hit by a tennis ball, but he wasn't and neither was I.

It turns out there's an obscure, vestigial leg muscle and tendon known as the plantaris that is often ruptured on the tennis court, an injury known as "tennis leg." The long, thin plantaris is easily mistaken for a nerve by rookie medical students, and so is nicknamed the "freshman's nerve."

The plantaris is thought to have been used by our evolutionary forebears for gripping with the hind foot, but as we have evolved past its use, something like 10% of the human population doesn't even have one. I have quickly gone from never having heard of the plantaris to being envious of those who don't have it.

In the sedentary hours since my immobilization, I've been doing some reading on plantaris injuries, and it's amazing how similar are the experiences of those of us who've been there. Take, for example, this excellent summary from the good people at the National Center for Emergency Medicine Informatics:

The patient will come in limping, having suffered a whip-like sting in his calf while stepping off hard on his foot or charging the net during a game of tennis, or similar activity. He may have actually heard or felt a "snap" at the time of injury. The deep calf pain persists and may be accompanied by mild swelling and ecchymosis [translation: bruising]. Neurovascular function will be intact.

Then there's this article by a sports medicine doctor in the Journal of the Canadian Chiropractic Association:

The injury occurs most frequently during running or jumping... Even though the injury is the result of an indirect mechanism, subjectively the patient may describe direct trauma to the calf region – often the athlete feels as though they were struck on the calf by an object such as a ball or piece of equipment.

So it's not just my family.

I also came across this helpful illustration: 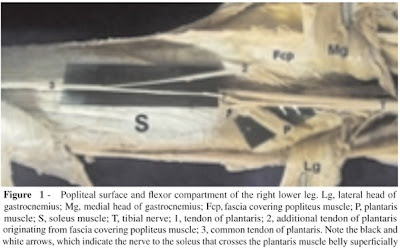 I don't understand a word of it, I'm just including it here because it looks cool.

In the immediate aftermath of the injury, though, I wasn't thinking about a medical explanation. I was mostly worried about whether I'd have to sit out the whole 2009 summer tennis season as I did in 2008 after a similarly bizarre wrist injury on the tennis court (between points, no less).

This time, from what I hear, it will be more like six weeks than six months of incapacitation. I'm grateful for that, as things looked pretty bleak at the time. I couldn't even walk off the tennis court under my own power; two fellow players had to help me. At least I found to my relief that I could still drive.

In the hours that followed, I got some medical advice and began treating the injury. Although it's still quite uncomfortable, I've gradually found I can limp unassisted, so should be able to get around without crutches. I'm also back to a normal range of motion today, which I find encouraging since immediately after the injury I could barely flex my foot up or down.

Yikes, that sucks! I'm sorry to have to welcome you to the freak accident club.

Good luck with your recovery.

Yeesh! At least mine was due to the frailties of the human body. Yours was due to someone else's preventable (and, need I add, actionable) negligence.

Sorry to hear about your injury, which was clearly way worse than mine.

Down here at WF it's just like Varsity Blues...we'll be glad to shoot you up with cortisone and get you right back out there. Spitting tobacco juice on it works pretty well too.

apparently, the drop shot wasn't ineffective at all.

Sorry to hear about your injury. Your proof that WebMD is addictive. Hope your recovery and rehabilitation go good. Perhaps you can go party with Richard Gasquet with your time off the court. Read the Gasquet article on ESPN for laugh.

Oh no, Ben! I'm glad you'll be okay, but it sucks that you have to sit out games for a few weeks. I guess it can't snap again, though, right?

I don't know. I just figured it was a partial tear, in which case I would guess the same thing could happen again after it heals. That's just a theory; you're the doc, doc.

Ben that sucks. However, you now have the opportunity to practice gripping with your hind foot, which apparently 10% of us will never get to do.