Last week was the anniversary of Lee Elia's big day, but now it's Kerry Wood's turn.

Wearing number 34 in honor of fellow Texan strikeout artist Nolan Ryan, Wood pitched like him too. Every Astro struck out at least once, and 3-4-5 hitters Jeff Bagwell, Jack Howell and Moises Alou, three times each.

Wood whiffed the first five batters he faced, and also struck out the side in the fifth, seventh and eighth innings in becoming just the second player ever to record 20 Ks in a nine-inning game. A third Texan, Roger Clemens, who called Wood after the game to congratulate him, did it twice. (Randy Johnson also matched the feat in 2001, but was denied recognition because his game went into extra innings.)

Wood allowed only one base hit, on a ball that glanced off third baseman Kevin Orie's glove and was ruled an infield single. Orie would rather have been charged with the error, as the Ricky Gutierrez shot proved to be the lone hit Wood surrendered all day; of course, only seven Houston hitters managed to put the ball in play. Wood had to settle for a one-hit shutout.

Striking out any twenty big-league hitters in a single game is an amazing feat, but Wood did it against a first-place team known for its solid hitting. Houston's starting lineup included surefire Hall of Famer Craig Biggio and onetime Rookie of the Year and National League MVP Jeff Bagwell. Three of their starters were batting over .300 at the time and the vaunted "Killer B's" (Biggio, Bagwell and Derek Bell) were all in their prime.

It didn't matter. They all looked foolish against the 20-year-old rookie, twisting themselves into knots trying to hit the kid. Then again, even an all-star team couldn't have touched him that day. His stuff was ridiculous, with his curveball breaking over three feet and his fastball hitting 100 m.p.h. on the radar gun. Some of his breaking balls looked like they were headed for the dugout when they crossed the plate. 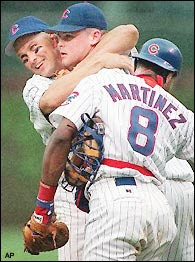 Craig Biggio did manage to reach base by getting hit by a pitch. It figured that the lone plunkee was Biggio, who recently retired just short of the all-time Hit By Pitch record.

Not only was Wood in an untouchable zone, he was also locked into the mindset of his catcher, Sandy Martinez. "We were on the same page," Wood said after the game. "Every sign he put down I already had the grip in my glove. It felt like we could have gone out there with no signals."

The fans in the stands eventually ran out of "K" signs to track Wood's progress, but they kept cheering for more, and he kept dealing.

As the game wore on, Wood just got better. Starting in the seventh inning, he struck out six straight batters, and ran it to seven when pinch hitter Bill Spiers went down swinging to open the ninth inning. This broke the rookie record of 18 strikeouts in a game.

After Biggio grounded out, the smallish crowd roared its appreciation and desire for Wood to finish in style. He did so, getting Derek Bell swinging to finish with an even twenty Ks. Thus did the 20-year-old Wood become only the second big-league pitcher ever to strike out his age. Bob Feller also pulled off the unusual feat in 1936, when "Rapid Robert" struck out 17 batters at age 17.

Wood was probably the beneficiary of a league-wide mandate to expand the strike zone, as home plate umpire Jerry Meals was generous with his strike calls. However, this hardly diminishes Wood's remarkable accomplishment. He was so far ahead of the hitters that the whole spectacle looked unfair. They might as well have been swinging a piano leg.

Wood's masterpiece overshadowed a fine performance by Houston starter Shane Reynolds, who struck out ten Cubs. Like Wood, Reynolds struck out the side in the first inning; thus, the game's first eight batters went down on strikes. Reynolds also pitched a complete game, surrendering only one earned run en route to a hard-luck 2-0 loss.

Recalling Johnny Vander Meer, the "Dutch Master" who pitched back-to-back no-hitters in 1938, Wood fired 13 more strikeouts in his follow-up appearance for a remarkable 33 strikeouts in two games. He went on to win 13 games that season, after which he was named the National League Rookie of the Year.

Sadly, "Kid K" would not manage a single strikeout the following year, as his now-familiar decade of injury problems began. In hindsight, one can't help but wonder whether Wood's magical 1998 season ruined his arm, just as some believe Steve Stone's extreme breaking balls during his 25-7, Cy Young Award-winning 1980 season compromised the rest of his career.

In May of 1998, though, the future looked bright for Kerry Wood. I can't imagine a more fitting pair of initials than K.W.
Posted by Ben at 8:30 AM

A few days after that game, I arranged to meet a friend at the North/Clybourn station. I arrived early and had some time to kill. I noticed an envelope sitting in a windowsill and opened it out of bored curiosity. Inside were two unused tickets for the May 6 game between the Cubs and the Astros.

As a Cardinals fan, I take some pleasure in imagining the self-loathing inspired by those lost tickets.