1. Cubs catcher Geovany Soto was credited with an inside-the-park home run last night when his long fly ball bounced off the Minute Maid Park outfield wall close to the yellow line. Me, I thought it looked like a regular home run and Soto got a little more exercise than he needed.

Then again, who cares? Soto has been terrific either way and the Cubs have won 9 of 11. Alfonso Soriano is your National League Player of the Week with 7 HR, 16 hits, 14 RBI, 10 runs, a .516 average and 6 multihit games from May 12 to 18, including 5 for 5 with 2 HR Saturday. He's swinging at beach balls with a tennis racket. As announcer Bob Brenly said, Soriano's so hot you have to wear an oven mitt to give him a high five.

The Soto homer reminds me of an old Onion article about the violent overthrow of America. One of the jokes went something like, "Most Americans will be sold into white slavery. Everyone else will be sold into regular slavery."

There's a possible further Cubs inaccuracy brewing in the person of recent hire Jim Edmonds, specifically in re his reputation as a washed-up, broken-down slugger who can't field his position. Friends of mine who follow Edmonds' last two teams have reported as much, and that the Cubs erred when they signed Edmonds to play center and sent Felix Pie down to the minors.

And maybe my friends are right, but you wouldn't know it by watching last night's game. With a two outs, a runner on base and the Cubs protecting a two-run lead, Hunter Pence tattooed a ball to deep center field. Edmonds took off on a dead run with his back to the infield and made an elegant catch about 400 feet from the plate, saving at least one run. He coasted to a stop as he ran up Tal's Hill behind the warning track.

It was reminiscent of Willie Mays' famous basket catch at the Polo Grounds in the 1954 World Series. Edmonds may be past his prime, but it looks like the eight-time Gold Glove winner could still have some gas left in the tank. 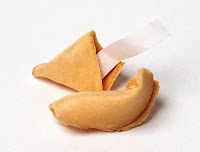 2. The paper slip in my fortune cookie from Opera the other night read, "You have a slow and unhurried natural rhythm." At least that's what I think it said, but my spastic hummingbird heart was beating so fast, I might have misread it.

3. The above is not a fortune, merely an observation.

This is a good lesson for the kids and all, and surely sound medical advice, but despite the feel-good sentiment it's not accurate as a matter of pure athletics. As the WSJ recently reported, steroid cheats generally not only prosper, they enjoy the sporting benefits for years after they knock off the sauce.

A more accurate tagline might be: "Steroids don't make great athletes, they make them rich."
Posted by Ben at 7:36 AM

Fozzie Bear says to not forget the Rock ballad by Dio, "Rainbow in the Dark"

3. courage is the wise man's name for fear.

Surely Kermit's lyric was alluding to the Dio oeuvre.