...not because anyone gifted the match, but because I received an unwanted tie.

As an initially nervous but increasingly confident young rookie, then a brash sophomore, then a self-assured veteran, I used to win matches or salvage ties with defense. The opposite is the case lately, as I turn wins into ties and ties into losses (note foreshadowing for the Tuesday match, as I write up the Monday match on Wednesday morning). I am also finding ways to make Ws evaporate with spectacularly bad decisions on questions where I have to guess, as I did today for the second time in seven matches.

Around 100 people stopped by here yesterday looking for a writeup; apologies to my loyal readers for the delay. I spent Tuesday playing tennis — an 8-6 victory that, including a few chitchat breaks during changeovers, took 2 ½ hours — and, for the first time in six months, poker, in a lengthy session that I should have ended earlier for reasons both temporal and financial. Tennis and poker are my personal biathlon, but during outdoor tennis season I rarely play cards.

OK, you didn’t come here to hear my life story, so let’s get this painful match summary over with:


1. In the field of geography, the term cordillera (e.g. American Cordillera, Arctic Cordillera, Cordillera Central) refers specifically to a connected chain of what?

If there is one thing about the gameplay in this league that makes me want to throw up, it's when I'm pretty sure I have a good guess, then convince myself not to follow my instincts and go with a lesser guess, only to find I was right in the first place, and it costs me a win or a tie.

That was the case here. It felt like mountains were the right answer. That made complete sense and was the only thing I thought of at first. But then, in a fit of unjustified arrogance, I decided that if a connected mountain chain were called a cordillera, I would have heard the word before. Never mind that whatever the answer was, I had still never heard the word. Never mind that it was screamingly obvious that connected chains of islands, which I went with, would be far too small to justify names like American Cordillera and Cordillera Central.

The two points I gave away on this one would have given me a win rather than the tie I ended up with.

2. The actor James Dean is credited with appearing in exactly three feature films, all in leading roles. Of the three, which was the only one widely released during his lifetime?

This one I played just right with a combination of knowledge and analysis. I knew for a fact that Giant was released after he died. So it was a coin flip between Rebel Without A Cause and East of Eden. I went with the latter for two reasons: (a) I felt like it was less likely that he’d get such a huge, iconic lead role in his first movie, and (2) East of Eden is somewhat more obscure and thus a more likely LearnedLeague answer. I didn’t see the league rewarding players who could name only the most famous of James Dean’s movies when a more interesting curveball was available. Sure enough, only 23% of players got this one.

3. A series of oil paintings by American artist C. M. Coolidge, which was commissioned in 1903 by the publishing company Brown & Bigelow to promote cigars, is best known today for featuring what?

The only decent guess I could come up with for a famous oil painting from a century ago was Uncle Sam. There were problems with this guess — it seemed likely either to go back further, like to the Civil War, or not that far, like to WWI or WWII, as the country probably didn’t need an oil painting to recruit soldiers for the Mexican War; and why would Uncle Sam “NEED YOU” to smoke cigars? — but I couldn’t come up with a better guess.

The only other thing I thought of was “Pittsburg” baseball star Honus Wagner’s insistence that his likeness be removed from tobacco-sponsored trading cards, creating a rarity that helps explain why they now sell for over a million dollars; but that involved a photo, not an oil painting, and it was later than 1903.

So I went with Uncle Sam, and the answer was dogs playing poker. Compounding the problem was that I gave this one the 3 and to his credit my opponent nailed it. Like me a lot of people thought their opponents would miss it (average defense 2.0, highest of the day) but 46% of players managed to get it. Just not my week for anything involving poker. 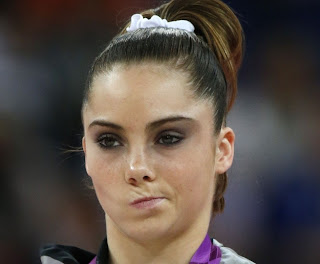 4. What is the name of this athlete?

McKayla Maroney (aka "that cute one"), which I not only knew but could spell, having taken note of her parents’ non-use of the more common Michaela. As the world saw during the recent Summer Games, her vault skills are both amazing and clutch, which I can say with the expertise of someone who spends about six minutes every four years thinking about the vault.

My opponent and I each gave this one the 0 and knew it, and leaguewide it was defensed the easiest at 0.9, yet only 52% of players got it right.

5. Most commonly, the chemical hydrolyzation process called saponification is used in the production of what?

I pulled this one out of thin air. Once again my AP Chem failed me, as I don’t know what hydrolyzation is, or whether it is the same thing as hydrolysis, or for that matter what hydrolysis is (and I am only fairly certain it exists). All I knew on this one was that savon is the French word for soap. Since I figured there was some chemical process involved in making soap, and because I had no other guess, I went with soap and was shocked that it was correct. But I defensed it wrong, giving it a 1 because my opponent was good in science, only to have him miss it.

6. On December 8, 2004, during a performance by the heavy metal band Damageplan in Columbus, Ohio, guitarist Dimebag Darrell was shot and killed by an audience member while on stage. Darrell was a founding member of what other band, with whom he first achieved fame?

Much like during a previous season, when I was able to identify both the Michael Jackson song Scream from an audio clip, and the preposterously named album on which it appeared, I was more embarrassed than proud to get this one. Dimebag Darrell played in Pantera, which I learned from the coverage of his hedonistic life and unfortunate death on the Howard Stern show. I’m not too proud of the time I spend on that either but its redeeming facets justify the more base segments, which I don’t even listen to.

I got 4 questions correct to my opponent’s 3, but as I have already boasted, my inferior defense let him catch up and earn a tie.
Posted by Ben at 8:00 AM

Regarding Q. 3: Now you see, that's what you get for playing poker with non-smoking cats.

Correct; at the enormous poker room at the Horseshoe in Hammond, Ind., mandatorily so.

Very nice write-up of our match. I enjoyed it immensely.

Q1. For myself, I also was unfamiliar with the word "cordillera," and so immediately ruled out "mountains" as a possible correct answer. However, the "chain" element of the question didn't lend itself to my other guess, "fault lines," and so I went with "volcanoes," which the Commissioner allowed (and which subsequent research has shown are present in multiple cordilleras -- who knew?).

Q2. Rebel Without A Cause was my guess. East of Eden was the answer to the question, "What James Dean movie could I not name on Monday morning even with a gun to my head?" Film is your strongest subject, so 1 point here.

Q3. Sometimes you just know the answer. "Dogs playing poker" was an example of that phenomenon. No hesitation, but enough of a YEKIOYD that I scored it as a 2-pointer.

Q4. Growing up, my mother made me watch gymnastics and figure skating on ABC's Wide World of Sports, and now I'm a fan of both. As you say, this was a gimme, but it was the internet meme that led me to score it zero.

Q5. I blindly guessed chocolate; the long word looked oddly familiar to me but staring at it did not make its meaning any more clear. Soap never crossed my mind; for whatever reason, I focused on foodstuffs. I gave 3 points since Science is not a strong suit of yours.

Q6. You are very strong in Pop Music, and this musician whom I'd never heard of was my other choice for a zero.

Good luck with the rest of the season.

It will sadden you to learn that "Makayla" is the most common spelling of the name, and it's far more popular in recent years than the traditional "Michaela" spelling ever was.