Having pounded everyone into submission yesterday, the Commissioner threw us some softballs today.

1. Name the university, founded in 1693, which is the oldest institution of higher education in the state of Virginia, and second-oldest in the United States after Harvard University.

Knew this cold. I have a number of friends who went to the College of William and Mary. Although I couldn’t have told you the year of its founding as I could have with Harvard (1636), nor mention a past president or two (Derek Bok, Neil Rudenstine), I would have known it was America’s second-oldest college even if I hadn’t been given the state of Virginia. 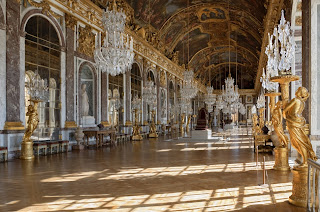 3. In what European city is this room located?

Went there when I was 16. It’s the Hall of Mirrors at Versailles, known in France as the Galerie des Glaces. Quoi d’autre voulez-vous savoir?

4. Brassie, Spoon, Jigger, Mashie Niblick, and Cleek are all obsolete items formerly used in what sport?

You either knew these or you didn’t, and I did. Sometimes you see a mashie or a niblick referred to as such, other times you see the term in the question. There is a golf course development not far from my office where the street names include these beautifully evocative terms (Mashie Ct., etc.). My opponent gave me 3 points for this one, which I happily took.

5. Though his hometown was Rutherford, New Jersey, the epic Paterson was the crowning achievement of what American poet and physician?

I would have drunk the beer today, but this one wasn’t a twist-off and I didn’t have a bottle opener. I’d heard of Paterson, just couldn’t remember who wrote it. As an English lit major, I probably should have known which major American poet was a medical doctor, but I didn’t (I believe Dr. Seuss was merely a PhD).

I guessed Robert Frost knowing it couldn’t be right. The answer was William Carlos Williams, or as they say in Spain, Guillermo Charles Guillermos.

6. What was the stage name of the DJ of the hip hop group Run-D.M.C. (and the only non-eponymous member), who was murdered in a Queens, New York recording studio in October of 2002?

Maybe if I had spent more time in college reading books in the library and less time playing Nintendo Tecmo Bowl football and listening to rap music, I would have gotten question 5 instead of question 6. But these are the choices we make in life.

The correct answer, as I well knew, was Jam Master Jay, not to be confused with Beastie Boys supporting player Mix Master Mike. I didn't even have to go to the well, i.e. my fading memory of the short conversation I once enjoyed with Darryl "D.M.C." McDaniels.

My opponent played better defense, giving up 1 point above the minimum to my 2, but by getting one more correct answer I squeaked out a 7(5)-6(4) win.
Posted by Ben at 9:45 PM

I'd never heard of "Paterson", or for that matter any poem of Williams' beyond the one about the plums in the icebox, but the clue about his being an M.D. got it for me. Couldn't think of any other doctor-poet. (And if there's a question about an insurance excecutive-poet, then it's gotta be Wallace Stevens.)

I gave my opponent 0 points for knowing William and Mary. It was her alma mater!

Different wheelhouses... I have a copy of "Paterson" (studied it in some course or other) and would have known this with any of the pieces of info given.

Knew it was Versailles, but said Paris. I've never been there and wasn't sure there was an actual city Versailles.

Remember when the DJ was killed, but not his name.

Congrats on the victory. Rundle B is gonna be tough this year.

The Uffizi in Florence was fresh in my mind, having been there last summer, so I put that for Q3 without much thought. Coincidentally I also went to Versailles when I was 16.

As for the golf question, I assigned 3 for it because when I have no idea on a sports question I assume it's difficult, but I guess this one wasn't. I guessed cricket, which was at least from the same part of the world.

i am not a fan of Rundle A, where I currently reside and have my behind handed to me daily. I either lose, or I tie. I miss B.

i lived in Rutherford. pretty much WCW and the Dairy Queen are all that's going on.

Every day is a tough day here, but fun.

1. William and Mary was easy. I have a colleague who served as their Library Director as well.

3. A hall full of mirrors seems a good bet to be *The* Hall of Mirrors in Versailles. Got it.

5. In addition to the writer/doctor thing, I used to live in Wayne, NJ, right next to Paterson.

6. And here's where the beer goes running away. Yes, I did actually play in the Hip-Hop ML but I finished near the bottom of the pack. I haven't gotten better since.

I figured pretty much everyone but me would know #6. My opponent had nearly perfect scores in both Literature and Pop Music, but I felt like the 3 should go there, so I gave it to question #5. We both ended up missing the last question, and I took a 6(5)-7(5) loss.