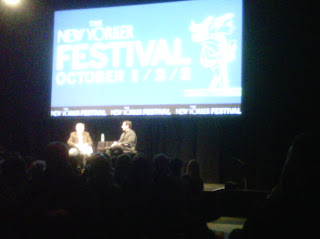 At his New Yorker Festival conversation with Tad Friend this morning, Steve Carell described the absurdity of living in Hollywood:

"We live around the corner from Miley Cyrus. One day my daughter decided to set up a lemonade stand at the end of our driveway. She was selling glasses of lemonade for 25 cents.

"Her first customer was Billy Ray Cyrus. He was out walking his dog. He gave her 20 dollars for a glass of lemonade.

"There are always tons of paparazzi outside the Cyrus house. All the paparazzi came around the corner to buy lemonade. They also gave big tips.

"Then the cops who chase the paparazzi away, they came around the block and bought lemonade. They paid a lot too.

"After an hour my daughter came inside with like 60 or 70 dollars. She was convinced that she could do this for a living. She had been completely misled.

"I tried to explain that this was not how the world worked. She was like, 'I'm buying a laptop!' "